US president Donald Trump has said he was confident that Covid-19 may have originated in a Chinese virology lab, but declined to describe the evidence. Video: Reuters 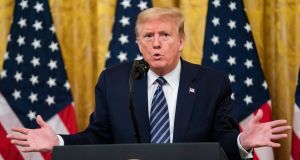 US president Donald Trump has said he was confident the coronavirus may have originated in a Chinese virology lab, but declined to describe the evidence, ratcheting up tensions with Beijing over the origins of the deadly outbreak.

Mr Trump did not mince words at a White House event on Thursday, when asked if he had seen evidence that gave him a “high degree of confidence” the virus came from the Wuhan Institute of Virology.

The Chinese state-backed Wuhan Institute of Virology has dismissed the allegations, and other US officials have downplayed the claims. Most experts believe the virus originated in a market selling wildlife in Wuhan and jumped from animals to people.

US secretary of state Mike Pompeo said on Thursday it was not known whether the virus came from the lab.

Mr Trump also said on Thursday it was possible that China either could not stop the spread of the coronavirus or let it spread. He declined to say whether he held Chinese President Xi Jinping responsible for what he feels is misinformation about the emergence of the coronavirus.

Mr Trump said of China’s efforts to get to the bottom of how the virus emerged: “At least they seem to be trying to be somewhat transparent with us.”

“But we’re going to find out. You’ll be learning in the not-too-distant future. But it’s a terrible thing that happened - whether they made a mistake or whether it started off as a mistake and then they made another one. Or did somebody do something on purpose?” he said.

Mr Trump also said on Thursday his hard-fought trade deal with China was now of secondary importance to the coronavirus pandemic and he threatened new tariffs on Beijing, as his administration crafted retaliatory measures over the outbreak.

Two US officials, speaking on condition of anonymity, said a range of options against China were under discussion, but cautioned that efforts were in the early stages. Recommendations have not yet reached the level of Trump’s top national security team or the president, one official said.

“There is a discussion as to how hard to hit China and how to calibrate it properly,” one of the sources said as Washington walks a tightrope in its ties with Beijing while it imports personal protection equipment (PPE) from there and is wary of harming a sensitive trade deal.

Seeking to quell a damaging trade war, Mr Trump signed a first phase of a multibillion-dollar trade deal with China in January that cut some US tariffs on Chinese goods in exchange for Chinese pledges to purchase more American farm, energy and manufactured goods and address some US complaints about intellectual property practices. Tariffs of up to 25 per cent remain on some $370 billion worth of Chinese goods imports annually.

Mr Trump has touted his tough stance on China trade as a key differentiator from Democratic challengers in the presidential race. Keeping tariffs in place on Chinese goods allows him to say he is maintaining leverage over China for a Phase 2 trade deal.