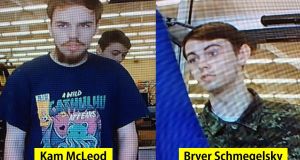 Kam McLeod, 19, and Bryer Schmegelsky, 18, from Port Alberni, British Columbia. The bodies of the two men were discovered after a three-week manhunt. Photograph: Getty

July 15th – The bodies of a man and a woman are found near a blue van on the Alaska Highway, also known as Highway 97. Australian Lucas Fowler (23) and US citizen Chynna Deese (24) were on a road trip when their bodies were discovered. Both had been shot. Two Canadian teenagers, Kam McLeod (19) and Bryer Schmegelsky (18), both from Port Alberni, British Columbia, emerge as suspects.

July 18th – In Jade City, 350km away, the teen suspects are spotted in a store where they stop for free coffee.

July 19th – Police announce the body of a man has been found 2km from a burned-out truck belonging to McLeod and Schmegelsky near Dease Lake. Dease Lake is about 470km from the first crime scene. The body of Canadian botanist Leonard Dyck (64) was found near the truck that Schmegelsky and McLeod were known to be driving when they left their homes on Vancouver Island some days previously.

July 21st –McLeod and Schmegelsky are spotted in Cold Lake, where a local resident, not knowing who they are, helps them free a stuck Toyota RAV4 they are driving. The are also captured on security-camera footage at a store in Meadow Lake.

July 22nd – Police constables in Split Lake, northern Manitoba talk with McLeod and Schmegelsky at a check stop, unaware of who they are. They see camping gear and maps in their vehicle.

July 23rd – Photos of the suspects and a 2011 grey Toyota RAV4 they have been driving are released. Fox Lake Cree Nation says a burnt-out vehicle is found near Gillam, about 170km east of Split Lake. Police search that area.

July 25th – Manitoba Mounties confirm two sightings of Schmegelsky and McLeod in the Gillam area. They say they are investigating a photograph of Nazi paraphernalia allegedly sent by Schmegelsky to another user on a video-game network. Schmegelsky is also pictured in military fatigues brandishing an airsoft rifle and wearing a gas mask.

July 28th – Police descend on York Landing, an isolated community southwest of Gillam, after it’s reported the suspects were seen at the local dump.

August 6th – Police say they have found several items linked to Schmegelsky and McLeod on the shore of the Nelson River in northern Manitoba. The items were found 9km from the vehicle they were driving.

August 7th – Police find the bodies of McLeod and Schmegelsky in dense brush in northern Manitoba. Assistant commissioner Jane MacLatchy says the bodies were found near the shoreline of the Nelson River, 2000km from where the original incident took place on July 15th.