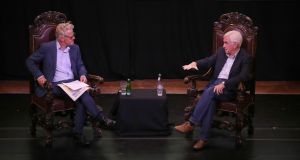 UK shadow chancellor John McDonnell during an interview with journalist Graham Spiers at Edinburgh Fringe Festival, where he said that Labour would not block a second Scottish independence referendum. Photograph: Andrew Milligan/PA Wire

Shadow chancellor John McDonnell on Wednesday waved aside opposition from Labour’s Scottish leader and some party members, insisting that Westminster should not block a second independence referendum.

Mr McDonnell’s willingness to overrule Richard Leonard on the central political issue in Scotland risks alienating opponents of independence and giving ammunition to critics who have labelled Scottish Labour a mere “branch” of the UK party, rather than an autonomous entity.

Mr Leonard, who became Scottish Labour leader in November 2017, said earlier this year that a UK Labour government would not agree to a second independence referendum, but Mr McDonnell said on Tuesday it would approve one if requested by the Scottish parliament.

The parliament at Holyrood has already voted in favour of a second referendum, and Mr McDonnell’s comments prompted Mr Leonard to issue on Wednesday a pointed statement calling the 2014 independence referendum a “once in a generation vote”.

“I met with John this morning, and I made clear to him that a second independence referendum is unwanted by the people of Scotland and it is unnecessary,” Mr Leonard said.

But in his second appearance in two days at the Edinburgh Fringe festival, Mr McDonnell said he was “not into blocking democratic exercises by any means” and that Mr Leonard “understands where I am coming from”.

He said that for a UK government to refuse to allow another referendum would be to play into the hands of Nicola Sturgeon, first minister and leader of the pro-independence Scottish National party.

“We would campaign against having a referendum, but we are not using parliamentary devices to block it,” Mr McDonnell said.

Ian Murray, Labour MP for Edinburgh South, accused Mr McDonnell of “doubling down” on a “massive” shift in constitutional policy.

“If the shadow chancellor wants to change that policy then he should consult the membership instead of making it up as he goes along at the Edinburgh Fringe,” Mr Murray said.

Scottish Conservatives and Liberal Democrats seized on Mr McDonnell’s remarks to portray themselves as the true defenders of Scotland’s place in the UK.

“I feel for those Labour voters that stood side by side with major figures of their party and against the forces of nationalism in 2014,” tweeted Scottish Tory leader Ruth Davidson.

Some independence supporters argue that Scotland could unilaterally hold an independence referendum, but Ms Sturgeon has made clear she will not organise one without formal approval from the UK government of the sort given in 2014.

Some observers saw Mr McDonnell’s comments as an overture to Ms Sturgeon’s SNP to win co-operation for Labour’s efforts to replace the Conservative government. However, Ms Sturgeon has made clear that she would not prop up a Tory administration.

Mr McDonnell himself dismissed suggestions that he was seeking a “pact” or coalition with the SNP, who he said were essentially Tories themselves.

The shadow chancellor’s comments on approval for a referendum are broadly in line with past statements from Jeremy Corbyn, Labour leader, who upset Scottish colleagues in 2017 by saying another independence vote would be “absolutely fine”.

Mr Corbyn subsequently retreated slightly from that position, stressing that he did not want a vote on independence but that it would be “wrong for Westminster to block it”.

The renewed debate risks further undermining the authority of Mr Leonard, who has struggled to make much impact since becoming Scottish leader.

Party officials declined to comment on whether Mr Leonard now accepted that a UK Labour government should approve another referendum if requested by the Scottish parliament or still believed that it should refuse. – Copyright The Financial Times Limited 2019