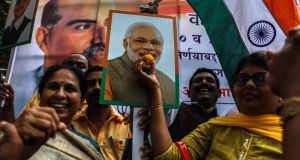 To India’s prime minister, Narendra Modi, eliminating the autonomy of Kashmir, a disputed, predominantly Muslim territory, was an administrative move, something his ministers had presented as simply a long-overdue “reorganisation”.

But to Modi’s critics, the decision was an attack at the heart of India’s secular identity and a historic blow to a democracy that celebrates itself as one of the most free and stable in the developing world.

There is little doubt that Kashmir needed fixing. It is one of the bloodiest, most stubborn flashpoints in south Asia, a complicated, disputed mountainous territory that several times has driven India and Pakistan to war. Both nations wield nuclear weapons and claim parts of Kashmir. For decades, their prickliness has kept the region trapped in a low-intensity conflict, leaving it depressed, full of rundown villages and the backdrop to a quixotic battle between a few hundred young militants and tens of thousands of Indian troops.

Previous Indian governments have struggled with what to do. But the unilateral action by Modi’s Hindu nationalist government Monday has struck many critics as deeply undemocratic. They worry it is a sign of how Modi plans to leave his stamp on India, making it more of a Hindu nation and more authoritarian.

“There are times in the history of a republic when it reduces itself to jackboot. Nothing more and nothing less. We are witnessing that moment in Kashmir,” wrote Pratap Bhanu Mehta, a columnist for the Indian Express. “This is not the dawn of a new constitutional settlement, designed to elicit free allegiance. It is repression, plain and simple.”

Kashmir remained on lockdown on Tuesday, with the internet out and nearly all phone lines severed, and India faced mounting criticism. The prime minister of Pakistan, Imran Khan, lashed out at Modi, accusing him of promoting “an ideology that puts Hindus above all other religions and seeks to establish a state that represses all other religious groups”.

While Modi’s decision was celebrated by Indians across a broad range of political persuasions, it was especially celebrated by those on the Hindu nationalist right wing. They have never been comfortable with a majority-Muslim state inside India, as revealed by a mission statement of the RSS, a right-wing Hindu group closely allied with Modi’s political party.

“The State of Jammu & Kashmir, with its oppressive Muslim-majority character, has been a headache for our country ever since independence,” the RSS says.

On Monday, Hindu nationalists danced in the streets and set off firecrackers. They waved India’s flag. They hugged and kissed. Ramesh Shinde, a spokesman for Hindu Janajagruti Samiti, a Hindu nationalist organisation, called the elimination of Kashmir’s autonomy a “historic step toward establishing the Hindu Rashtra”, the Hindu nation.

This has long been a fear about Modi, who won a landslide re-election in May. Yes, he has pushed development. He has reduced high-level corruption. He has envisioned and completed far-reaching social projects, such as building 100 million toilets in five years, at the rate of about 40 per minute.

But Modi rose through the ranks of the RSS, and his critics have always been suspicious that, beyond modernising India, he wants to change its fundamental character as well.

India’s founding fathers, including the first prime minister, Jawaharlal Nehru, made a specific decision at independence in 1947 to become a secular nation, unlike Pakistan next door that follows a state religion, Islam.

During Modi’s first term, which began in 2014, government bodies began rewriting history books, lopping out sections on Muslim rulers. They pushed extremist Hindu priorities, like an effort to locate a mystical river that features prominently in Hindu scriptures. Critics called it pseudoscience, saying it was akin to using public dollars to study mermaids.

Hate crimes against Muslims, who make up about 15 per cent of India’s population, also have increased under Modi, adding to the widespread perception that his government favours Hindus over Muslims. Some analysts warn that if Modi succeeds in his strategy with Kashmir he will move on to issues that are even more religiously polarising. These include wiping out Muslim marriage and inheritance laws and building a Hindu temple in Ayodhya on the ruins of a Muslim mosque.

“This is a government that feels they have got this massive mandate,” said Harsh Pant, a professor of international relations at King’s College London, referring to the election in May when Modi’s Bharatiya Janata Party, known as the BJP, won close to two-thirds of the vote. “They believe their agenda is now a mainstream agenda ... They’re moving full steam ahead.”

The changing attitudes are reflected in the BJP’s campaign promises. In 2014, when Modi first ran for prime minister, his party vowed to revoke Kashmir’s autonomy but said it would “discuss this with all stakeholders”. In the 2019 campaign, that stakeholder phrase was omitted, a sign of things to come.

On Monday, Amit Shah, India’s home minister, delivered the stunning news on the floor of parliament that the central government was unilaterally revoking the special status that Jammu and Kashmir had enjoyed as a semiautonomous state for decades and splitting the state into two federal territories.

Shah insisted this would bring better governance, a flood of outside investment and, most important, peace. Many Indians instantly supported him; they see Kashmir as a back door to Pakistan, and the sterner the action, the better. All along, Modi has pursued a muscular approach to Pakistan. In February, he ordered air strikes on Pakistani soil after a Kashmiri militant, with links to a Pakistani militant group, rammed a carload of explosives into an Indian military convoy in Kashmir, killing at least 40 soldiers.

Some analysts said that US president Donald Trump’s recent offer to help mediate between India and Pakistan on Kashmir had unsettled Modi and might have pushed him to move quickly. India’s position has long been that Kashmir is an integral part of India; now that Kashmir is a federal territory, it will be even easier to take that stand.

The decision on Kashmir was “part of this larger Hindu agenda,” said Arati Jerath, a prominent newspaper columnist. But more than that, she said, it was “driven by a need to claim Kashmir as ours”.

Kashmir has always been an anomaly in India. It was a princely state, ruled by a Hindu maharajah, but with a population that was majority Muslim. It chose to remain apart from India and Pakistan, but shortly after those two countries were granted independence from Britain in 1947, militants from Pakistan invaded Kashmir, sending the maharajah running to India for help.

That led to a federation with India and a special status that was enshrined in Article 370 of the Indian Constitution. Article 370, which has now been dismantled, had guaranteed Kashmir a fair degree of autonomy from the central government and allowed it to pass its own laws on land and criminal activity.

One such law made it illegal for non-Kashmiris to own land – a virtually existential issue for natives of the Muslim-majority territory, who fear being swallowed up by India’s Hindus. With the special land protections wiped out, they predict an influx of millions of Hindu Indians into Kashmir, turning them into a minority in their own land.

The way Kashmir’s autonomy was erased, critics say, was like a coup. In the days leading up to the announcement, the government rushed in thousands of soldiers, arrested civilian political leaders, cut off the internet and disabled phone lines, including landlines, which no one can remember ever having been done before. This sealed off all the doors and exits for just about any news to emerge.

“This is a campaign to show the rest of the country that they are punishing Kashmiris and that they are going to strip us not only of our special status and identity, but also our dignity,” said Iltija Javed, the daughter of a prominent Kashmiri politician, who succeeded in transmitting a message to the New York Times on Tuesday. “At the moment, none of us are allowed to even step out of the house. This is appalling for the world’s largest democracy.”

Kashmiris who managed to find wifi connections said that sporadic protests had erupted and that some civilians had been shot dead, but it was difficult to verify the information. On the floor of parliament on Tuesday, India’s home minister, Shah, called the government’s decision a “golden moment”. Shortly after, lawmakers in the lower house of parliament gave final approval to the Jammu and Kashmir Reorganisation Bill by an overwhelming majority.

The move seems destined to be tested in court. On Tuesday, a veteran public interest lawyer filed the first legal challenge to the government’s actions in the supreme court, which has a history of blocking some government decisions.

Kashmiris are aching for peace and an end to the cycle of militant attacks, repression, protests and more militant attacks that have devastated the economy. The area has enormous economic potential: stunning alpine scenery, great downhill skiing, endless apple orchards and a centuries-old excellence in weaving carpets. But because of the conflict and the restrictions on outsiders owning land, most big companies have stayed away.

Jerath said she expected non-Kashmiris to move into Kashmir. But she was unsure if the change would improve development, as the government has argued, or simply further alienate Kashmiris. “The question,” she said, “is whether they will win over people in Kashmir or whether it will become another West Bank.” – New York Times