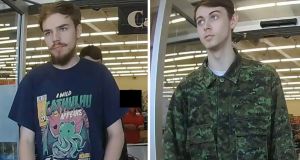 Canadian police hunting for two fugitives suspected of killing a North Carolina woman and her Australian boyfriend, as well as another man, have found two bodies.

She said she is confident it is them but a post-mortem will confirm the identities.

Police said on Tuesday that items belonging to the pair were found along the Nelson River in Manitoba. The two bodies were located 1km from the items.

Mr McLeod and Mr Schmegelsky have been charged with second-degree murder over the deaths of Leonard Dyck and were suspects in the shootings of Australian Lucas Fowler and American Chynna Deese.

“We are confident that these are the bodies of the two suspects wanted in connection with the homicides in British Columbia,” Ms MacLatchy said.

The body of lecturer Mr Dyck was found on July 19th next to a road in British Columbia.

Mr Fowler and Ms Deese of Charlotte, North Carolina, were shot dead on July 15th on the Alaska Highway about 480km from where Mr Dyck was killed.

The search is over. At 10am this morning, Manitoba RCMP officers located the bodies of two males, believed to be the BC suspects, near the shoreline of the Nelson River (approx 8km from the burnt vehicle). #rcmpmb pic.twitter.com/tZ7EBFsNDr

A manhunt for the pair had spread across three provinces. The suspects had not been seen since their burnt-out car was found on July 22nd.

The bodies were found near Gillam, Manitoba – more than 3,000km from northern British Columbia.

Police said on Tuesday they were investigating all possibilities including the possibility that the suspects might have drowned.

A police helicopter initially spotted a damaged boat along the Nelson River last week and a follow-up search in the area uncovered the items directly linked to the two in what authorities described as very challenging terrain.

She said there is a sense of relief for families of the victims involved and the communities in the area.

“It’s huge to be able to hopefully give some people the opportunity to exhale and to hopefully go back to being normal and not be afraid of who is out in the woods,” she said.

“We are speechless,” Ms Deese said in a text message.

Mr Schmegelsky’s father Alan Schmegelsky said last month that he expected the nationwide manhunt to end in the death of his son, who he said was on “a suicide mission”.

Mr McLeod and Mr Schmegelsky grew up together on Vancouver Island and worked together at a local Walmart before they set off together on what their parents thought was a trip to Yukon for work.

Police were investigating a photograph of Nazi paraphernalia allegedly sent online by one of the suspects. Mr Schmegelsky allegedly sent photographs of a swastika armband and a Hitler Youth knife to an online friend on the video game network Steam. – AP