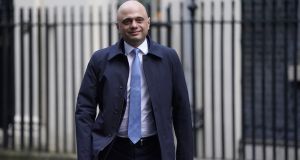 Chancellor of the Exchequer Sajid Javid says there will be an impact on business one way or the other, some will benefit, some won’t. Photograph: Peter Summers/Getty Images

UK chancellor of the exchequer Sajid Javid signaled Britain is planning to shift its economy further away from the European Union, firing an early salvo in the next stage of negotiations.

Mr Javid’s comments, coupled with a report in the Daily Telegraph that prime minister Boris Johnson is planning to formally open trade talks with the US as soon as next month, suggest Britain is seeking to put early pressure on the EU’s trade team even before the UK officially leaves on January 31st.

The UK government is speeding up plans for trade negotiations with the US, the Telegraph reported, with civil servants preparing advice for ministers and Mr Johnson poised to seek authorisation from the cabinet to start talks with the US next month possibly during a trip to Washington.

Any move to start negotiations with the US before trade talks with the EU get fully under way could send a strong message to the EU that Britain wants to break free of European regulations. It could also further complicate discussions with Brussels.

Talks with the EU already face a daunting schedule this year, with the EU probably agreeing its formal negotiating mandate only in late February and the official transition period expiring on December 31st. Mr Johnson says that deadline is immovable, while EU chief negotiator Michel Barnier calls it “extremely challenging.”

The debate over how much Britain will diverge from the EU with regards to regulatory standards is set to form a key plank for how the talks progress .

German Chancellor Angela Merkel has warned that the further the UK goes it alone, the more it will be regarded in Brussels as a direct competitor.

“There will be an impact on business one way or the other, some will benefit, some won’t, ” Mr Javid said in the Financial Times interview, urging companies to adjust their strategies accordingly. He plans to back more projects in regions outside London and the southeast, and pump more funds into training the country’s workforce.

As for the UK’s finances, Mr Javid said he wants to bolster growth rates to between 2.7 per cent and 2.8 per cent a year. Improving productivity, which has been a brake on the economy for several years, is also an issue he’s seeking to address, he told the FT.–Bloomberg