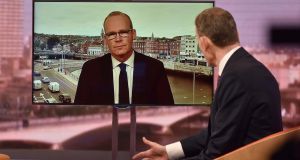 Passing law to prevent the extension of Brexit negotiations will not force the EU to rush into a deal, Tánaiste Simon Coveney has warned.

Mr Coveney said the EU felt the end of 2020 deadline set by Boris Johnson was “ambitious, if not unrealistic”.

Mr Coveney said he felt it would take longer than 12 months, as he highlighted the deal encompassed much more than trade and included areas like aviation, fishing and data.

“When people talk about the future relationship, in the UK in particular, they seem to only talk about a future trade agreement, actually there’s much more to this than that — there’s fishing, there’s aviation, there’s data and so many other things,” he said.

“I know that prime minister Johnson has set a very ambitious timetable to get this done. He has even put it into British law, but just because a British parliament decides that British laws say something doesn’t mean that that law applies to the other 27 countries of the European Union and so the European Union will approach this on the basis of getting the best deal possible — a fair and balanced deal to ensure the EU and the UK can interact as friends in the future.

“But the EU will not be rushed on this just because Britain passes law.”

Asked about the possibility of a series of side deals on specific areas if time ran out to strike a comprehensive agreement, Mr Coveney raised concern.

“We would certainly much rather negotiate a comprehensive deal that deals with all of these things collectively and together,” he told the BBC’s Andrew Marr Show.

“If we have learned anything from the first round of Brexit, which has taken a lot longer than it should have, is that we have got to provide certainty for people, we can’t continue to have crisis after crisis and the uncertainty and brinkmanship of Brexit negotiations.”

The Tánaiste also expressed concern at the tone of media coverage in the UK, highlighting attempts to frame the engagement as Britain trying to defeat or stand up to the EU.

“This is the language of enemies, not friends, and we need to move away from that,” he said.

“Both sides in this negotiation in the next stage of Brexit has a vested interest in working together — not to try to outmanoeuvre each other.”

A key issue in the negotiations will be how the financial services industry in the City of London will be able to serve clients within the EU.

Amid concern the EU might limit the City’s access to its European markets, outgoing Governor of the Bank of England Mark Carney has warned that it would not be appropriate for the sector to be regulated by Brussels.

Mr Coveney said it would be impossible to maintain the system as it presently operates. “Maybe the penny is finally dropping that when you leave a union that you have been a part of for 45 years that things don’t remain the same and that is inconvenient and it has consequences for the UK,” he said.

“The UK has decided to move in a different direction, no longer as part of the European Union and the collective shelter of that and opportunity that comes with that.

“No way of the UK in this negotiation maintaining the relationship we have today while outside of the European Union, and that’s the reality of Brexit I’m afraid.”

Asked whether the EU was committed to agreeing a security partnership with the UK, regardless of the fate of trade negotiations, Mr Coveney said the bloc would approach the issue “responsibly”.

“Certainly I think security is something the EU wants to get an early agreement on with the UK and I think that makes sense for both sides,” he said.

“But again this is something that Boris Johnson is saying he wants to do in less than 12 months and I think the European Union has constantly warned that that timeframe is ambitious if not unrealistic.

“So from an EU perspective we will try to approach all of these really important and sensitive areas with a sense of partnership and friendship, but at the same time they are complex and we will need to work through all of them, hopefully in parallel, but in my view it is probably going to take longer than a year, but we’ll have to see.” - PA