Brexit explainer: What are the main sticking points in the talks? 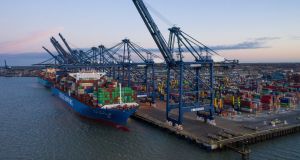 The EU and UK are trying to strike a deal on their future relationship before the end of the transition period at the end of this year. Photograph: Dan Kitwood/Getty Images

So this is the “crucial week” for Brexit talks?
Well, kind of. The EU and UK are trying to strike a deal on their future relationship before the end of the transition period at the end of this year. Time is now very tight because any deal will have to be ratified by both sides – and in particular on the EU side this involves significant work, including a vote in the European Parliament.

The talks could well run into next week and there is even speculation that they could go further, with some special arrangements for ratification. With both sides saying movement is needed in the next week to ten days, we are entering a crunch phase politically. EU leaders may discuss the issues at an online conference on Thursday, though it is not on the formal agenda.

The end game is approaching.

What is at stake?
The UK left the EU at the end of last January, but under the withdrawal agreement entered a transition period during which existing arrangements remain in place. This runs out on December 31st.

If the negotiations succeed, then the relationship between the two sides, particularly on trade, can go forward on an agreed basis. If not, then damaging tariffs will be imposed and there is a risk of disruption to trade and uncertainty in other areas. such as aviation, data security, energy and so on.

What are the key issues?
The talks have come down to two key areas – fisheries and fair competition. On fisheries, EU countries want ongoing access to UK coastal water, a vital issue for the Irish fleet, notably for mackerel, but also for fleets from other EU countries including France, the Netherlands and Spain.There is also no agreement on how quotas, outlining how different types of fish can be landed, will be agreed and managed in future. The UK is insisting on control of its “waters.” Little progress has been made on the issue since summer, according to the Minister for Foreign Affairs, Simon Coveney, speaking on Monday.

And the fair competition issue?
Last week EU chief negotiator Michel Barnier tweeted a picture of himself in Regent’s Park in London, taking a break from talks and looking, he said, for a “level playing field”.

This is the jargon for EU insistence that if UK companies are going to have access to the EU single market, then they must not have an unfair advantage in doing so. A key issue here is rules to control State aid to UK companies, but there are also rules to be agreed on areas like the environment and workers’ rights. The discussion covers issues like how these rules are put in place, what obligations will the UK have if EU rules change in future and, crucially, how this will all be overseen. This area of “governance” has been difficult from day one, with the UK baulking at involvement from EU courts.

And what about the special arrangements for Northern Ireland?
As part of the withdrawal agreement, there was a special protocol on Northern Ireland, designed to avoid the need for a trade border on the island of Ireland. How this will work in practice is being negotiated by a separate committee. How goods are checked as they cross the Irish Sea from the Britain to Northern Ireland is contentious and there are fears of disruption, for example to supplies to supermarkets in the North due to the need for new checks.

Another major issue here is the UK government’s publication of its Internal Markets Bill, which would allow it to breach the terms of the protocol in relation to the movement of goods between Northern Ireland and the UK and state aid to companies in Northern Ireland.

Coveney said this weekend that the EU would not sign an overall deal unless the UK removed the threat to breach the existing agreement. If an overall trade deal is done, this issue may effectively disappear, though disagreements may remain on the implementation of the protocol.

What are the prospects of a deal?
There is a lot to be done now in a short period of time. The most likely route forward would be for the EU to give some ground on the fisheries issue and the UK to fudge some of its red lines on the level playing field. This is politically treacherous for both sides. But failing to reach a deal would cause huge damage and both will also be aware of that.

For Ireland it is estimated that no trade deal would knock 3 percentage points off the growth rate for 2021 and cause severe problems for sectors like beef, which would be hit by high tariffs, or import duties, in the UK market. There would also be threats of delays to trade going via the UK landbridge to and from EU markets and higher prices in shops, particularly supermarkets.

The EU could agree some measures to try to limit the damage, though it is not yet clear what these would be. If there is a deal, on the other hand, both sides will presumably try to minimise any problems next January.