‘A special place in hell’: Why did Donald Tusk goad Brexiteers? 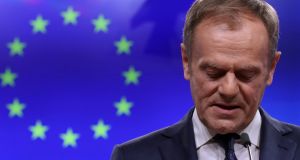 European Council president Donald Tusk in Brussels on Wednesday. He angered UK Brexiteers when he said he had been “wondering what that place in hell looks like for those who promoted Brexit without even a sketch of a plan for how to carry it out safely”. Photograph: Yves Herman/Reuters

Donald Tusk’s blast at Brexiteers on Wednesday was a combination of exasperation at the continuing shenanigans in London, and a warning to Theresa May that Brussels will not be a pushover.

The British prime minister arrives in Brussels on Thursday determined, she says, to win backstop concessions, but also well aware that the EU is sticking to its guns and that she is more than likely to go away empty-handed.

“I’ve been wondering what that place in hell looks like for those who promoted Brexit without even a sketch of a plan for how to carry it out safely,” Tusk mused at the end of an otherwise carefully crafted statement expressing support for Ireland and the backstop.

To be fair, it could be said that his target was not May, who had been a Remainer – albeit half-hearted – until she was landed with the task of carrying out Brexit. But that’s a nuance that the British press does not seem interested in.

And he must have known he was heading for a row – an open mike caught Leo Varadkar teasing him after the statement with the words “that’s going to get you in trouble”. Tusk shrugged with a grin.

The European Council president has always been less inhibited – less diplomatic, some would say – than his counterpart across the road in the European Commission, Jean Claude Juncker.

Tusk has spiced up the end of many council meetings with comments to the press that go beyond the strict consensus he is supposed to represent. No one is in any doubt where the man stands on the issues they have been debating.

Asked if he shared Tusk’s views, as Varadkar watched on laughing, Juncker joked that his friend Donald was much more Catholic than him. He tended to believe in heaven – but hell, he wasn’t sure. He had experienced hell though, he said, in his current job.