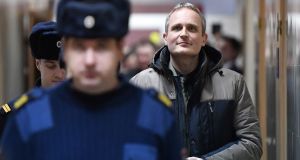 Dennis Christensen is escorted inside a courthouse following the verdict announcement in the town of Oryol on Wednesday. Photograph: Mladen Antonov/AFP

A court in western Russia handed a Danish citizen a six-year prison term on Tuesday for practising his religion as a Jehovah’s Witness.

Dennis Christensen became the first Jehovah’s Witness to be jailed in Russia since the country banned the religious organisation nearly two years ago and launched a crackdown on its followers.

Mr Christensen was arrested during a police raid on a Jehovah’s Witnesses Bible study group in May 2017 the city of Oryol, 326km south of Moscow, and charged under Russian anti-extremist laws. Law enforcers said they had found illegal religious literature at the premises where the prayer group met.

A district court in Oryol sentenced Mr Christensen to six years in prison on Wednesday for organising the activities of a religious organisation in full knowledge that it was banned. Russian prosecutors had recommended a tougher, 6½-year jail term.

Defence lawyers said they would appeal against the sentence.

Jehovah’s Witnesses have faced increasing pressure since Russia’s supreme court declared the US-based organisation extremist in April 2017 and ordered its property to be turned over to the state. Russia’s justice ministry then issued a blanket ban on Jehovah’s Witnesses, paving the way for criminal charges to be brought against believers for proselytising or simply gathering together.

Dozens of Jehovah’s Witnesses are facing criminal charges in Russia, where the group has an estimated 175,000 followers.

Anders Samuelsen, Denmark’s foreign minister, said he was “deeply concerned” by the Oryol court ruling on Wednesday and urged Russia to respect freedom of worship. The Danish foreign ministry “will continue to follow closely and assist Dennis Christensen should he decide to appeal”, he wrote on Twitter.

Mr Christensen’s case has attracted the support of international rights groups, which called for his immediate and unconditional release.

“The Russian authorities should respect, protect, promote and fulfil the right to freedom of belief enshrined in the country’s Constitution and human rights treaties to which Russia is a state party,” Amnesty International said in a statement.

The guilty verdict handed to Mr Christensen was “a disgrace”, said Rachel Denber, deputy director of the Europe and Central Asia division at Human Rights Watch. “It’s shocking that the authorities are putting him through this ordeal for nothing more than peacefully practising his faith.”

Jehovah’s Witnesses were first registered in Russia in 1991 as the country embraced religious freedom in the wake of the Soviet Union’s collapse.

Some political commentators said the organisation’s US origins and its followers’ refusal to participate in military service might explain the Russian authorities’ growing aversion to its activities. Some pointed out that as committed pacifists, Jehovah’s Witnesses were an easy target for persecution as they were unlikely to become radicalised.

1 Crowds gathering in Dublin city centre ‘ugly image’ for the capital, say vintners
2 Kanye West says he will run for US president in 2020
3 Gardaí find Dublin business selling alcohol but claiming to be a restaurant
4 Bobby Storey: The IRA's planner and enforcer who stayed in the shadows
5 Covid-19: Travel restrictions to stay and 'green list' put on hold amid fears of second wave
Real news has value SUBSCRIBE