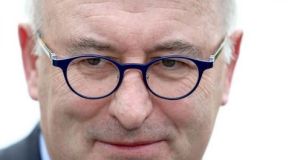 Phil Hogan: he declined to discuss the size of any potential EU package of financial supports

EU agriculture commissioner Phil Hogan says he is satisfied Brussels has the tools to help Irish farmers in “any exceptional circumstances” that might arise from a no-deal Brexit.

Mr Hogan said the EU was “ready for all eventualities” should Irish farmers suffer a collapse in food prices in the event of the UK crashing out of the EU without a deal at the end of March.

The Irish commissioner said past crises in the EU agri-sector, including the 2014 Russia ban on EU food imports, means that Brussels has “tools available that we are able to put into effect fairly quickly”.

The Government and the EU have held talks at political and official level on a package of compensation to support farmers should they suffer heavy UK tariffs and plummeting prices, in particular on beef, in a hard Brexit.

Half of all Irish beef exports end up in the UK, leaving the industry with what Minister for Agriculture Michael Creed described as an “existential challenge” should it face an estimated €700 million in tariffs.

Overall, Mr Creed estimated that the agri-food sector faced €1.7 billion in tariffs in a no-deal scenario.

Mr Hogan declined to discuss the size of any potential EU package of financial supports. “You don’t know what scale you are talking about until we see the outcome, whether it is going to be a soft or hard Brexit, so we can’t jump to conclusions otherwise we might distort the market unintentionally,” he told The Irish Times.

The Irish Farmers Association warned that a no-deal Brexit would be a “wipeout” for farmers in a no-deal scenario as they would face price falls of more than 25 per cent that would put up to 70,000 beef farmers out of business.

“Everybody is satisfied that the tools available are sufficient to deal with any exceptional circumstances that might arise,” said Mr Hogan.

In addition to loosening state aid rules the EU could provide exceptional aid under the same common agricultural market rules that Brussels funnelled hundreds of millions of euro to farmers in the Baltic states and other EU states affected by the Russia ban in response to sanctions over its annexation of Crimea.

Minister for Climate Action and Environment Richard Bruton said discussions were ongoing with the commission on what might happen in a hard Brexit, including any logistical supports that would be needed.

He did not comment on indications his climate change plan would be postponed as a consequence of a no-deal Brexit, especially because of its implications for farmers, but he insisted on RTÉ’s The Week in Politics that Brexit would not be the latest excuse to hold off on climate action such as carbon tax.

Mr Bruton said the deadline for his whole-of-government plan was the end of March, and setting a trajectory of rising carbon taxes would be part of the plan.

Green Party leader Eamon Ryan, reacting to an Irish Times report on Saturday that the Government plan might be postponed in a hard Brexit, said delaying climate change “doesn’t make sense” as the plan could help farmers diversify away from an over-reliance on the UK beef and dairy export market.

“If anything you would want to ramp up your protections for agriculture by diversifying away from these large commodity markets,” he said.

Mr Bruton confirmed that the State was facing €5 billion in fines for not delivering on its climate commitments based on current “business-as-usual” projections out to 2030. He said this threat required cuts in emissions in every sector, including agriculture.

Separately, the State is facing recurring compliance costs of up to €300 million a year for failing to miss 2020 targets on renewable and carbon emissions reductions.

The only concession the EU has granted up to now is on how some Irish emissions will be calculated in the future, which will make future targets less onerous, but current emissions are rising in key sectors, and fall well short of meeting even the less onerous targets.