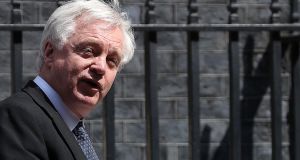 Britain’s Brexit secretary David Davis is creating a Brexit plan that would give Northern Ireland joint UK and European Union status so it could trade freely with both, as well as a buffer zone to eliminate the need for border checkpoints with Ireland, The Sun newspaper reported on Thursday.

Mr Davis is drawing a proposed 16km-wide trade buffer zone along the border that would be in effect for local traders, like dairy farmers, after Britain leaves the bloc, the newspaper said.

The Department of Foreign Affairs offered no comment on the specific proposal in a statement released in response to the plan the UK’s Brexit secretary is reportedly creating.

Instead it urged Britain to engage with the EU “in a more detailed way” on the parts of the draft Brexit treaty relating to Ireland and Northern Ireland, including the “backstop” option that would keep Northern Ireland in the EU’s customs union and single market if no other solution was found to avoid a hard border.

“At this stage in the process, the UK must engage in a more detailed way on the draft text of the protocol on Ireland and Northern Ireland, including the backstop,” said a spokesman for the department.

“The engagement must be through the formal negotiation with the Task Force, led by Michel Barnier. The Tánaiste and Irish officials are in ongoing contact with the EU Task Force team.”

Mr Davis’s plan is a revision of the “max fac” or “maximum facilitation” plan, the report said, citing a source.

British prime minister Theresa May previously pledged to take the UK out of the EU customs union by considering two options.

One would be “max fac” in which the UK and EU would be entirely separate customs areas but would try to use technology to reduce friction and costs at the border.

The other option being considered is a “customs partnership”, according to which the UK would co-operate with the EU more closely and collect tariffs on its behalf with no requirement of declarations of goods crossing the border.

The European Union previously criticised Ms May for not setting out how the UK would achieve a frictionless border with the EU without erecting a land border to control goods between Northern Ireland and the Republic of Ireland.

Britain suggested earlier this month that it would be willing to extend the use of EU tariffs as a backstop if there were delays in ratification of a Brexit deal to avoid a return to a hard border between Northern Ireland and Ireland, adding the government did not want to use that option.

The British Irish Chamber of Commerce dismissed the idea of a 10-mile Border buffer zone being considered by the UK government as “unworkable.”

“Moving the problem of the Border to 10 miles away won’t solve the problem,” said John McGrane, the director-general of the chamber. “All that will happen in a dual-territory model is added costs of complying with double regulations - and more costs means less jobs.”

The chamber was “aghast” that, with the clock on negotiations “ticking down daily towards a potential hard Brexit,” that the UK government is still not saying clearly how it will deliver a borderless future for trade both north/south and east/west between the UK and Ireland, he said. - additional reporting - Reuters