Biden presidency will be a great relief for many Arab leaders

Autocrats will mourn Trump’s loss, but most will not miss his destabilising effect 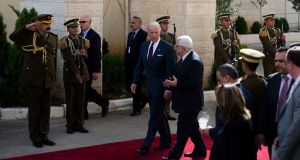 US president Donald Trump will not be missed by most Middle Eastern rulers and their people, as his transactional policies in their region have been severely disruptive and destabilising.

The autocratic Saudi, Emirati, Bahraini and Egyptian rulers will, however, mourn his ousting. They had a stake in a Trump victory. He treated them as regional leaders, excused their human rights abuses, sold them weaponry and adopted a harsh stand towards Iran, which they see as their rival.

Trump’s first foreign visit as president was to Riyadh, where King Salman and his son Prince Mohammed celebrated his advent with sword dancing and a $350 billion arms deal, the largest in history. This deal was transactional because the Saudis not only received weapons to prosecute their stalemated war in Yemen but also US political and logistical involvement, despite strong opposition in the US Congress.

The Saudis also staged a summit where Trump met the rulers of 54 countries, including Egypt, the UAE, Kuwait, Jordan, Indonesia, and Malaysia. The event closed with the inauguration of a Global Centre for Combatting Extremism based, ironically, in Riyadh, which has spent billions of petrol dollars exporting the narrow, regressive Wahhabi ideology adopted by al-Qaeda and Islamic State.

By adopting unaccountable rulers in Saudi Arabia, the Gulf and Egypt, Trump has alienated millions of Arabs. Without a word of criticism from Washington, Riyadh murdered dissident journalist Jamal Khashoggi in its consulate in Istanbul and thousands of Saudis and Egyptians have been imprisoned for calling for civil rights and reform.

Motivated by his pro-Israel evangelical Christian base and hawkish advisers, Trump upended longstanding international policy in the region by recognising Jerusalem as Israel’s capital and shifting the US embassy there, as well as defunding Unrwa – the UN agency looking after Palestinian refugees – and replacing a “two-state solution” for the emergence of a Palestinian state with an alternative favourable to Israel.

Trump deepened popular Arab anger with both the US and rulers by pressing for normalisation of ties between Israel and the UAE, Bahrain and Sudan. Most Arab leaders will be greatly relieved by Trump’s departure.

By withdrawing from the 2015 deal requiring Tehran to reduce its nuclear programme in exchange for sanctions relief, and by reimposing sanctions on Iran, Trump tried and failed to curb Iran’s outreach and tilt the regional balance of power to favour Saudi Arabia.

Leadership in the Middle East has traditionally been exercised by Cairo, Baghdad or Damascus, which exemplify Arab identity, history, culture and political will. Since Riyadh is not steeped in these attributes, the leaderless Arabs drift while largely non-Arab Iran and Turkey intervene in their affairs.

As president, Joe Biden has promised to revert to the two-state solution, refund Unrwa and restore good relations with the Palestinians without moving the US embassy from Jerusalem. He has pledged to return to the Iran nuclear deal once Tehran reverts to compliance.

No longer isolated and sanctioned, Iran is likely to adopt more conciliatory regional policies with the aim of resuming oil exports, halting economic meltdown and rescuing its people from penury. Congress is certain to push Biden to stem the flow of arms to the Yemen war and to press for its end.

Instead of relying on pro-Israel and anti-Iran ideologues, as Trump has, Biden will consult professionals. Foreign policy advisers Antony Blinken and Jake Sullivan are experienced Washington insiders who served in the Obama administration. While Blinken has a reputation for considering carefully every political initiative, Sullivan was a back-channel negotiator on the Iran deal and could play a key role in returning to it.

Security adviser Colin Kahl wrote in the Financial Times that a Biden administration would scrutinise arms sales to Saudi Arabia and the UAE. This would remove US policy from Trump’s transactional realm and serve Washington’s regional policy goals.