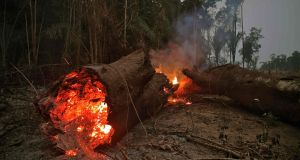 The number of fires in Brazil’s Amazon rainforest jumped 28 per cent in July from a year ago, official data showed on Saturday.

Although that is a three-year high for July, the figure pales in comparison to last year’s peak of 30,900 fires in August – a 12-year high for that month.

Still, environmental groups say there are worrying signs of what may come, with the final days of the month showing a sharp spike. More than 1,000 fires were registered on July 30th, the highest number for a single day in July since 2005, according to an analysis by advocacy group Greenpeace Brasil.

“It’s a terrible sign,” said Ane Alencar, science director at Brazil’s Amazon Environmental Research Institute. “We can expect that August will already be a difficult month and September will be worse yet.”

Environmental advocates blame right-wing President Jair Bolsonaro for emboldening illegal loggers, miners and land speculators to destroy the forest with his vision of economic development for the region.

Mr Bolsonaro defends his plans to introduce mining and farming in protected reserves as a way to lift the region out of poverty.

This year, the president authorised a military deployment from May to November to combat deforestation and forest fires. He has also banned setting fires in the region for 120 days.

In 2019, Brazil instituted the same temporary policies later in the year, only after fires in the Amazon provoked global outcry in August.

Scientists say the rainforest is a vital defence against climate warming because it absorbs greenhouse gases.

Non-government organisation Amazon Conservation says it has tracked 62 major fires for the year as of July 30th. Many of those came after July 15th, when the fire ban went into effect.

Criminals generally extract valuable wood from the jungle before setting fire to the land to increase its value for farming and ranching. Natural fires are very rare in the Amazon.

Earlier this month, scientists with US space agency Nasa said higher surface temperatures in the tropical North Atlantic Ocean in 2020 were drawing moisture away from the southern Amazon.

“As a result, the southern Amazon landscape becomes dry and flammable, making human-set fires used for agriculture and land clearing more prone to growing out of control and spreading,” Nasa said on its website. – Reuters