Spike in cases in and near Barcelona a particular concern 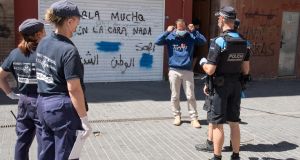 Police officers asking a man to wear a face mask in Lleida, Catalonia. Regional authorities announced special movement restrictions in the area of Segria in Lleida due to a coronavirus outbreak. Photograph: EPA/Ramon Gabriel

New outbreaks of coronavirus in Spain have raised concerns about the country’s ability to keep the virus under control during the summer season while feeding into longstanding political tensions between Catalonia and Madrid.

In late June, Spain’s government ended a three-month state of emergency under which it had supervised a strict lockdown, stabilising the numbers of infections and deaths. Since then healthcare powers have been returned to individual regional administrations.

The lifting of restrictions has seen a rise in new infections. On Monday the health ministry said there were 201 active outbreaks – that is, three or more cases linked to one source of contagion – across Spain.

Catalonia and neighbouring Aragón, in northeastern Spain, have been seeing the fastest spread of the virus. The Catalan area of El Segrià, which includes the city of Lleida and has around 200,000 inhabitants, has spent over two weeks in isolation. Barcelona and the towns surrounding it, which are currently the biggest concern, were put under new restrictions at the weekend.

“We need to act with determination to avoid finding ourselves back where we were in March,” said Catalan government spokeswoman Mertixell Budó, shortly before the new restrictions were introduced in and around the Catalan capital.

According to figures released by the Catalan government on Monday, there were nearly 3,800 new cases in the region over the previous week, although daily numbers have started to drop. The cities of Sabadell and Terrassa are the latest areas to see a spike in contagion.

All of this has led to criticism of the regional administration.

“The Catalan government reacted late to Lleida, and it has reacted late to the [Barcelona] metropolitan area situation,” said Barcelona’s leftist mayor Ada Colau, as the new measures were announced.

Antonio Balmón, the Socialist mayor of Baix Llobregat, one of the areas near Barcelona which have been affected by the new restrictions, complained of the Catalan government’s “erratic handling” of the situation.

Meanwhile, Jacobo Mendioroz, head of the regional unit managing the Covid-19 crisis in Catalonia, acknowledged that the authorities were “a little bit slow” to detect the rise in cases in the Lleida area.

Such reproaches are particularly uncomfortable for Catalan president Quim Torra, who persistently questioned the Spanish government’s management of the pandemic during the three-month lockdown. Accusing the leftist government of Pedro Sánchez of being slow to respond, Torra also portrayed the use of the state of emergency as an attempt by Madrid to recentralise powers.

In April, Budó went further, suggesting that “we would not have had as many deaths or infections” if Catalonia had been independent.

According to El País newspaper, such comments “have come hurtling back to Torra like a boomerang” in the light of his own government’s performance in recent weeks.

The effectiveness of the new measures in place in and around Barcelona have been questioned given that they recommend, but do not make obligatory, staying at home and avoiding travel and large gatherings. Many people have ignored the guidelines, and on Tuesday local authorities further reduced the number of people allowed on to Barcelona’s beaches, while Torra said that sanctions would start to be introduced.

The health situation in Catalonia has again raised the issue of regional sovereignty in recent days.

The staunchly unionist Ciudadanos party has called on the Spanish government to “take control” in the northeastern region in order to implement stricter measures.

However, Sánchez, a Socialist, is wary of damaging his already fragile relationship with Catalonia. His coalition government has needed the parliamentary support of the Catalan Republican Left (ERC), which is a partner in the region’s pro-independence government.

Before the Covid-19 crisis hit the Spanish and Catalan governments had embarked on a tentative series of negotiations aimed at resolving the territorial problem. Although those talks had been due to resume this month, there has been another cause of discord.

Last week it was revealed that spyware had been installed on the phone of Catalan parliamentary speaker Roger Torrent and at least two other pro-independence figures. The software, created by an Israeli company and installed last year, is reportedly only available to governments.

Torrent accused the Spanish state of spying on him, prompting the national government and the police to deny knowledge of the hacking incidents.