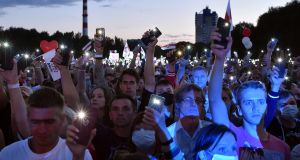 The Kremlin has called on Belarus to release 33 Russian mercenaries arrested on suspicion of collaborating with opposition figures to commit terrorist acts during the country’s increasingly tense presidential election campaign.

The men were detained this week amid claims from Alexander Lukashsenko, the authoritarian president of Belarus, that foreign powers were planning to incite street protests and stir up unrest in a bid to end his 26-year rule.

Despite government warnings of security risks, tens of thousands of Belarusians rallied in their capital, Minsk, on Thursday night to support Svetlana Tikhanouskaya, who decided to run in the August 9th presidential election after her husband, an opposition blogger, was jailed along with other critics of Mr Lukashenko.

“We hope, and we’re even certain, that very soon our Belarusian colleagues will sort out this incident and free the Russian citizens,” Kremlin spokesman Dmitry Peskov said on Friday, when Russian president Vladimir Putin discussed the matter with his security council.

“Without doubt, the baseless arrest of the Russian citizens . . does not entirely fit with the framework of allied relations,” Mr Peskov added, referring to the so-called union state through which Russia and Belarus are deepening their integration.

Mr Peskov said the Kremlin was “extremely concerned” that Russian diplomats had not been allowed to meet the detainees, and insisted the mercenaries had been travelling legally through Belarus to another, unnamed, country.

“Belarus is our ally, of course we want the [election] campaign to go as successfully as possible. We don’t plan to interfere,” he said, noting that Mr Putin had not discussed the incident with Mr Lukashenko.

Their relations have cooled in recent months, as the Belarusian leader has pushed back against Moscow’s attempts to accelerate integration through the union state, which many people in Belarus see as a threat to its sovereignty.

Ms Tikhanouskaya, who has no political experience, addressed a rally in Minsk on Thursday that drew more than 60,000 people according to rights group Vyasna.

“What revolution are you constantly talking about? We just want fair elections! Why are you stirring up trouble? We are peaceful people and we want peaceful changes in our country,” she said in response to Mr Lukashenko’s claims.

Ms Tikhanouskaya (37) sent her two children abroad this month after allegedly receiving threats that they could be taken into care if she continued campaigning.

The two most prominent members of her team are Veronika Tsepkalo, whose husband Valery was banned from the election race, and Maria Kolesnikova, who led the presidential campaign of opposition politician Viktor Babariko until he was jailed this month.