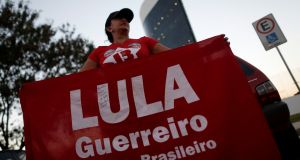 Supporters of Luiz Inacio Lula da Silva, display banners with text written in Portuguese that read “Free Lula” during a protest in front of the Superior Electoral Court, in Brasilia, Brazil on Friday. Photograph: Adriano Machado/Reuters

The ruling came after a dramatic and gruelling late-night session broadcast live on television and across news sites, and defied a request from the United Nations human rights committee that he be allowed to stand.

Lula is serving a 12-year sentence for corruption and money laundering. The court also banned him from campaign advertisements. His defence said it would appeal the decision to Brazil’s supreme court.

From behind bars, Lula, the hugely popular, two times former leftist president and union leader leads polling in Brazil’s most unpredictable and polarised presidential election in decades. The decision to bar his candidacy plays to the advantage of extreme rightwing candidate Jair Bolsonaro, running second in polls and ahead without Lula.

“I never wanted this and if it depended on me I would have avoided that destiny brought us here,” said Luis Barroso, the judge who steered the process and voted to bar the candidacy of the most popular Brazilian leader in living memory. His colleague Edson Fachin - who has jailed other politicians in a sprawling graft investigation - disagreed and said the United Nations decision should prevail.

The human rights commission said in a statement in August that its decision was “an urgent measure to preserve Lula’s right, pending the case consideration on the merits, which will take place next year”.

‘A week that will shame the judiciary forever’

A majority of the seven judges on the court agreed with Barroso, who argued that the United Nations recommendation could not supersede a “clean slate” law that bars candidates convicted of serious crimes, corruption or who have been impeached, and was introduced under Lula’s second government in 2010.

Lula’s leftist Workers’ party attacked the decision and vowed to fight for his candidacy. “We will defend Lula in the streets, with the Brazilian people,” said party president Gleisi Hoffman.

“This is a week that will shame the judiciary forever,” the party said in a statement, arguing that the clean slate law only banned candidates after all appeals processes were exhausted. Lula has a number of appeals outstanding at higher courts. He also faces several other corruption cases that his lawyers decry as “lawfare”.

Marcus Vasconcellos, a professor of constitutional law at the Paulista University in Sao Paulo, said Brazilian law should take prevalence over the UN. “The clean slate law was approved by representatives of the Brazilian people, by elected lawmakers,” he said.

The ruling had been made exceptionally quickly, Vasconcellos said, because prosecutors wanted the issue of Lula’s candidacy resolved - he had already begun appearing in TV campaign adverts that started screening on Friday. “There is an issue of the speed of the judgment, it is not normal,” he said.

Lula’s conviction handed down in 2017 by Sergio Moro, a crusading anti-corruption judge, ruled that the firebrand former union leader had been given a renovated seaside apartment by a construction company as part of a sprawling bribe scheme at state-run oil company Petrobras.

Anger over the graft network, which saw leading figures from the Workers’ party and its former allies jailed, helped drive the 2016 impeachment and removal of Lula’s successor Dilma Rousseff on charges of breaking budget rules.

In January a three-man court in Porto Alegre upheld Lula’s conviction and raised the sentence to 12 years. His lawyers called the sentence a “farce” and said he had never owned the apartment.

Lula is being held in a federal police cell in the southern city of Curitiba where he receives regular visits from party chiefs registered as his lawyers. He proclaims his innocence and maintains the sentence was politically motivated to keep him out of an election he would almost certainly win, and was largely based on plea bargain testimony from an executive looking to reduce his sentence. Leading British academics and leftist politicians have also criticised the sentence and described Lula as a political prisoner.

Lula’s vice-presidential candidate Fernando Haddad, a former academic and mayor of Sao Paulo, is widely expected to take over the candidacy. He has been campaigning in the poorer north-east region where Lula was born into barefoot poverty and where his support is strongest. On Saturday Haddad was due to address a rally in Garanhuns, the town in the semi-arid interior of Pernambuco state where Lula was born.

The issue for Lula’s supporters is whether he can transfer enough of his votes to Haddad before the first round vote on 7 October. “What is in play is the foundation of democracy,” Haddad tweeted on Friday. “The right of the people to choose their president.”–Guardian