EU, US open to change of borders as part of Kosovo-Serbia deal 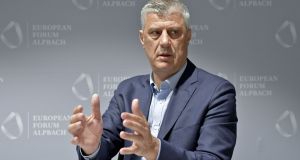 Senior EU and US officials have said they are now open to a possible change of borders as part of a historic settlement between Kosovo and Serbia, a move that has long been ruled out as dangerous and destabilising for the Balkans.

Belgrade and Pristina have aired ideas for a border change with growing frequency in recent months, as they seek a deal under which Serbia would finally recognise Kosovo’s independence, removing a key obstacle to both states’ hopes of EU accession.

Serbian foreign minister Ivica Dacic says the new impetus comes from US president Donald Trump’s openness to fresh ideas on a settlement with Kosovo, but until now the EU seemed unwilling to consider exchanges of territory that many Balkan experts fear could set off a domino effect of such claims around the region.

Speaking alongside the Kosovo and Serbian presidents on Saturday, EU enlargement commissioner Johannes Hahn said “we should not exclude” anything in searching for an end to the impasse between the two countries.

“Whatever the solution finally is, and we should not exclude anything... should respect that the overarching goal is stability in the region and this kind of solution should not trigger any additional ideas,” Mr Hahn said at a conference in Austria.

“I think it would be not wise if we as quasi-outsiders at this stage of discussions are intervening in one or other way. We should leave it to them...Finding a solution will be supported by us if the overall setting is okay,” he added.

He spoke the day after White House national security adviser John Bolton said US policy “is that if the two parties can work it out between themselves and reach agreement, we don’t exclude territorial adjustments. It’s really not for us to say”.

“I think there are new signs that both governments very quietly may be willing to negotiate on this...We would not stand in the way, and I don’t think anybody in Europe would stand in the way if the two parties to the dispute reached a mutually satisfactory settlement,” he added during a visit to Ukraine on Friday.

Though Serbian president Aleksandar Vucic has not revealed what he wants from negotiations, his senior officials have suggested partition of Kosovo, with mostly Serb inhabited northern areas returning to Belgrade’s control.

Kosovo president Hashim Thaci, a rebel commander during a 1998-9 war with Belgrade’s forces, says he will not give away any land but backs a “border correction” to incorporate largely ethnic Albanian parts of southern Serbia into his country.

“We are not problematic guys – we are trying to do an agreement,” Mr Thaci said on Saturday, drawing laughter and applause from the audience and a chuckle from Mr Vucic.

“Nobody need be afraid of peace negotiations between Kosovo and Serbia...we need support from the EU and US,” he added.

Later, Mr Thaci tweeted: “Kosovo is determined to reach a binding legal agreement with Serbia... That’s why, we have decided to explore every possible option... including possible border correction”.

Many Balkan analysts say meddling with borders would have unpredictable and potentially dangerous consequences, including population movements and demands from nationalists in Serb- and Croat-run parts of Bosnia to join Serbia and Croatia proper – ambitions some still harbour 23 years after the end of Bosnia’s war.