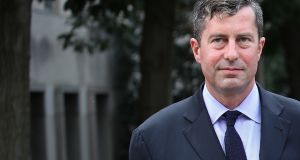 A Republican political consultant linked to Paul Manafort and Cambridge Analytica has admitted to funnelling $50,000 (about €43,000) from a Ukrainian oligarch to Donald Trump’s presidential inauguration committee.

Sam Patten paid the money to an American “straw purchaser” on behalf of the unidentified oligarch, in return for four tickets to Mr Trump’s inauguration in January 2017, according to a plea agreement made public on Friday. The inauguration committee was not allowed to accept money from foreigners.

The disclosure came as Mr Patten pleaded guilty to illegally lobbying in the US for pro-Russia politicians from Ukraine. As part of his plea deal, he agreed to co-operate with Robert Mueller, the special counsel investigating links between Donald Trump’s campaign team and Russian interference in the 2016 presidential election.

Mr Patten (47) admitted causing the Ukrainian funds to be paid to the inauguration committee, and to then lying to a Senate committee investigating Russian interference in the election in an attempt to cover this up. He was not charged for these actions.

He pleaded guilty to one count of working as an unregistered agent for the oligarch’s Ukrainian political party, Opposition Bloc, which also employed Manafort, the former chairman of Mr Trump’s 2016 campaign. Mr Patten was released on bail by Judge Amy Berman Jackson following a hearing in Washington, DC.

The charge was brought by the US attorney’s office in the capital, which took over the case following a referral from Mr Mueller’s office. The court filings indicated that Mr Patten had been in discussions with Mr Mueller’s office for at least three months.

A spokesman for the US attorney’s office said the charge against Mr Patten was a felony punishable by a maximum of five years in prison and also carried potential fines. Stuart Sears, an attorney for Mr Patten, declined to comment.

A spokeswoman for Thomas Barrack, the chairman of Trump’s inauguration committee, did not respond to requests for comment.

The filings recounted how Mr Patten formed a consulting company in the US with Konstantin Kilimnik, a Russian political operative with alleged ties to intelligence services. Mr Kilimnik, identified as “foreigner A” in the filings, has also worked extensively with Manafort, who was a consultant to Opposition Bloc in Ukraine.

After discovering foreigners were barred from giving money to the inauguration, Mr Patten enlisted another American to buy four tickets. The oligarch paid $50,000 to Mr Patten and Mr Kilimnik’s company from an account in Cyprus. Mr Patten then wrote the American “straw purchaser” a $50,000 cheque and the American used these funds to buy the tickets the following day.

Mr Patten then lied about this arrangement during testimony to the Senate intelligence committee in January 2018, he admitted on Friday. He had failed to provide requested documents and gave misleading evidence during the interview. As well as this, after the interview he deleted files relating to his work for the Ukrainians.

In all, according to the court documents, Mr Patten’s firm was paid about $1 million for advising Opposition Bloc and lobbying US politicians on its behalf.

Mr Patten admitted that he knew he was required to register as an agent for a foreigner but failed to do so after the Ukrainian oligarch said “he did not want them to” until an unspecified future date.

Mr Patten also drafted opinion articles for the Ukrainian oligarch and succeeded in having at least one published by a national American media outlet in February 2017.

The media outlet were not identified in the charging documents.

A pro-Trump article was published by US News & World Report in February 2017 under the byline of Serhiy Lyovochkin, an Opposition Bloc MP who was a senior official in Ukraine’s previous pro-Kremlin administration.

Earlier this month, Manafort was convicted on eight counts of bank and tax fraud arising from the Mueller investigation. During the trial, a former colleague testified that Manafort received payments from Mr Lyovochkin and disguised them as loans to avoid paying tax.

Mr Kilimnik is charged alongside Manafort in a separate criminal case brought in Washington by Mr Mueller.

Mr Patten also carried out work for Cambridge Analytica, the now-defunct consultancy that is under scrutiny for its work on Trump’s 2016 election campaign. – Guardian