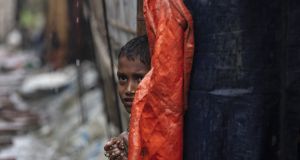 UN investigators said on Monday that Myanmar’s army had carried out genocide against the Rohingya in Rakhine state. Photograph: Paula Bronstein/Getty Images

The Nobel Peace Prize to Aung San Suu Kyi will not be withdrawn in the light of a United Nations report that said Myanmar’s military carried out mass killings of Rohingya Muslims, the Norwegian Nobel Committee said on Wednesday.

In a report released on Monday, UN investigators said Myanmar’s military carried out mass killings and gang rapes with “genocidal intent”, and the commander-in-chief and five generals should be prosecuted for the gravest crimes under international law.

The report marked the first time the organisation has explicitly called for Myanmar officials to face genocide charges over the army crackdown on Rohingya people in Rakhine State.

Aung San Suu Kyi, who leads the Myanmar government and won the Nobel Peace Prize in 1991 for campaigning for democracy, has been criticised for failing to speak out against the crackdown.

“It’s important to remember that a Nobel Prize, whether in Physics, Literature or Peace, is awarded for some prize-worthy effort or achievement of the past,” said Olav Njoelstad, the secretary of the Norwegian Nobel Committee.

“Aung San Suu Kyi won the Nobel Peace Prize for her fight for democracy and freedom up until 1991, the year she was awarded the prize,” he said.

And the rules regulating the Nobel Prizes do not allow for a prize to be withdrawn, he added.

The Norwegian Nobel Committee, which awards the Nobel Peace Prize, consists of a panel of five Norwegians, mostly former politicians and academics, who reflect the different forces in the Norwegian parliament. The other Nobel Prizes are awarded in Sweden.

Last year, the head of the committee, Berit Reiss-Andersen, also said it would not strip the award amid criticism of Aung San Suu Kyi’s role in the Rohingya crisis.

“We don’t do it. It’s not our task to oversee or censor what a laureate does after the prize has been won,” she said in a television interview. “The prize winners themselves have to safeguard their own reputations.”

“Our stance is clear and I want to say sharply that we don’t accept any resolutions conducted by the Human Rights Council, ” Zaw Htay, the main government spokesman, said in an interview published in state media.

Myanmar did not allow UN investigators to enter the country, he said. “That’s why we don’t agree and accept any resolutions made by the Human Rights Council.”

He added that the country has “zero tolerance to any human rights violation” and had set up a commission of enquiry to respond to “false allegations” made by the UN and “other international communities”.

Myanmar has said the military was responding to a legitimate threat from Rohingya militants, who attacked police posts across the western Rakhine State.

“If there is any case against human rights, just give us strong evidence, record and date so that we can take legal action against those who break the rules and regulations,” Zaw Htay said.

The same day as the UN released its report, Facebook shut down the account of army general Min Aung Hlaing and other top military officials, accusing them of using its platform to spread “hate and misinformation”.

Zaw Htay said the government had not ordered the ban and was questioning Facebook about the action, saying it had caused “mounting criticism and fear among the people”.