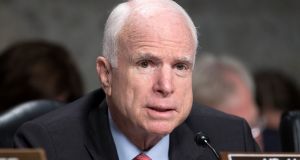 The late US senator John McCain was a strong supporter of Israel and a hawk who urged US military intervention in the Middle East and elsewhere. Responding to his death, prime minister Binyamin Netanyahu called him “a true friend of Israel” and Knesset members from right to left eulogised him.

McCain first visited Israel in 1978, identified with Israel and his views on the region were coloured by this connection.

He voiced “absolute commitment” to peace between Israel and the Palestinians, but according to former US ambassador to Israel Daniel Shapiro, he accused the Obama administration of “devoting too much time to doomed Israeli-Palestinian peace talks”.

On the internationally backed “two-state solution” – the creation of a Palestinian state alongside Israel – McCain said if the US were to vote for a UN Security Council resolution mandating action, “Congress would have to examine our funding for the UN”.

He condemned the December 2017 security council resolution declaring illegal Israeli settlements in the 1967 occupied territories as “another chapter in the UN’s bizarre anti-Israel history”.

Contradicting the line he had adopted, McCain criticised President Donald Trump’s recognition of Jerusalem as Israel’s capital and said its final status should be resolved by Israelis and Palestinians in a peace process he considered “doomed”.

McCain fixated on Iran, which is regarded by Israel as its main regional antagonist. In 2007, during a rally for the Republican Party presidential nomination, McCain said the “real problem” in the region was Iran. He then attempted to sing Bomb, Bomb, Bomb Iran, a ditty popular during the 1979-80 incarceration of 52 US diplomats in the US embassy in Tehran.

He argued Iran is “dedicated to the destruction of Israel” and was critical of the 2015 deal for dismantling Iran’s nuclear programme in exchange for the lifting of sanctions. He held the US rift with Iran is “the most serious crisis we have faced – outside of the entire war on terror – since the end of the cold war”.

Antagonism toward Tehran determined McCain’s attitude toward its ally, Syria. In 2013, McCain crossed into northern Syria to meet insurgents and called for the US to arm them. In 2016, as the Syrian army battled insurgents in eastern Aleppo, McCain said, the “name of Aleppo will echo through history as a testament to our moral failure and everlasting shame”.

In 2017, McCain castigated ex-secretary of state Rex Tillerson for suggesting the US could agree to Bashar al-Assad remaining in power. In April this year, he criticised Trump for calling for US troop withdrawal from Syria.

McCain backed the 1991 US war on Iraq but criticised the administration for failing to march to Baghdad. In January 1998, McCain joined the right-wing think tank, Project for the New American Century, which advocated multiple pre-emptive wars to project US global power.

The first was the 2003 Iraq war, which McCain supported while criticising the conduct of the occupation. In 2017 he wrote that the Iraq war was “a mistake” and shouldered his share of blame for the debacle.

In 2011 he visited Libyan rebels in Benghazi and argued for US intervention on their side in the civil conflict. An ally of Iraq’s Kurds, McCain backed them against Islamic State and in disputes with Baghdad.

Supporters of the Bill argued that Saudi Arabia had spread its puritanical ideology around the world, and recruited and armed extremists.