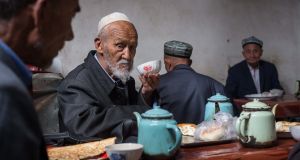 An Uighur man drinking in a tea shop in Kashgar City, Xinjiang province, China. A UN panel said about a million Uighurs were being held in a “massive internment camp that is shrouded in secrecy”. Photograph: Anadolu Agency/Getty Images

China has rejected comments by United Nations human rights experts calling for the release of hundreds of thousands of Muslim Uighurs allegedly held in political re-education camps in the far-western province of Xinjiang.

The UN’s Committee on the Elimination of Racial Discrimination (CERD) cited estimates that about one million Uighurs were being held involuntarily in extra-legal detention on the “pretext of countering terrorism”.

The panel said the Uighurs were being held in a “massive internment camp that is shrouded in secrecy”.

China blames anti-China forces for the criticism and says Xinjiang is under threat from Islamist militants. Foreign ministry spokeswoman Hua Chunying said the UN experts remarks were “without factual basis” and said that Chinese people’s satisfaction with Xinjiang’s security and stability had risen dramatically.

“The policies and measures in Xinjiang are aimed at preserving stability, promoting development and unity, and improving livelihood,” Ms Hua said.

In a letter to The Irish Times on August 27th, a Chinese embassy spokesman said measures taken by the local government of Xinjiang, “are in fact continuous actions supported and embraced by all the people in China fighting against terrorism”.

Beijing says Uighurs enjoy full rights but said anyone “deceived by religious extremism . . . shall be assisted by resettlement and re-education”.

The panel carried out a two-day review of China’s record in Xinjiang. It criticised China’s “broad definition of terrorism and vague references to extremism and unclear definition of separatism in Chinese legislation”.

“We are recommending to China if this practice exists, to halt it. We are asking China to release people if they don’t have a legal ground to be detained,” panel member Nicolas Marugan told Reuters Television.

Gay McDougall, vice-chairwoman of CERD, described the area as a “no-rights zone” and the committee called on Beijing to end detention without charge, trial and conviction and immediately release individuals currently detained under these circumstances.

In Washington, a group of lawmakers called for sanctions on Chinese officials linked to the mass internment. CERD called on Beijing to give information on the number of people being held and on what grounds they were being detained, and for impartial probes into allegations of racial, ethnic and ethno-religious profiling.

Xinjiang, which borders Pakistan and Afghanistan, is an autonomous region that is home to 10 million Uighurs. It is China’s biggest domestic producer of oil and gas, and a key element of President Xi Jinping’s “Belt and Road” initiative, a policy that aims to run a new Silk Road connecting Europe and the Middle East to China with trade, investment and infrastructure.

There have been terror attacks by Uighur separatists in China, including an attack in 2014 where a group of Uighurs attacked Kunming train station with knives and killed 31 people.

Beijing says there are links between Uighur separatists and fundamentalist Islamist groups. Uighurs have fought with Islamic State and the al-Qaeda affiliate group Jabhat al-Nusra in Syria.