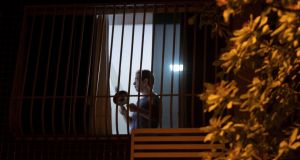 A man in São Paulo bangs on a saucepan in protest during President Jair Bolsonaro’s TV address on Tuesday night. Photograph: Carlos Menezes/EPA

Brazilians once again took to banging pots and pans on Tuesday night in protest at another chaotic day in the country’s response to the coronavirus pandemic on which President Jair Bolsonaro distorted advice from the World Health Organisation (WHO).

The far-right leader had selectively quoted the director-general of the WHO, Dr Tedros Adhanom Ghebreyesus, to support his campaign against the lockdown in place across much of Brazil.

He said comments by Dr Ghebreyesus “basically” said that informal workers “have to work” during the pandemic. In fact the director-general has consistently recommended isolation measures to combat the virus while emphasising the need to provide financial assistance to informal workers affected by lockdowns.

Without citing Mr Bolsonaro by name, Dr Ghebreyesus swiftly responded on social media re-emphasising that those without regular incomes “deserve social policies that ensure dignity and enable them to comply with #COVID19 public health measures”.

“I grew up poor and understand this reality,” the Ethiopian-born WHO head added. “I call on countries to develop policies which provide economic protections for people who can’t earn or work amid the #COVID19 pandemic. Solidarity!”

Later in the day, Brazil’s health minister Luiz Henrique Mandetta said the WHO was not advocating a return to work, contradicting the president. Mr Bolsonaro has reportedly considered firing Dr Mandetta because of his resistance to demands that he relax recommendations for social distancing.

Mr Bolsonaro has been calling for Brazilians to get back to work as part of his campaign against the efforts headed up by Dr Mandetta and most of Brazil’s governors to combat the spread of Covid-19. He has argued that coronavirus is nothing more than a mild flu and shutting down the economy to combat it would do more damage than the virus itself.

He has even suggested Brazilians might be more immune to it, citing as evidence the fact they can swim in sewage “and nothing happens”. In recent days Twitter, Facebook and Instagram have deleted posts by the president as part of their campaign against what Instagram called “disinformation which could cause real harm to people”.

After the slapdown by the WHO, Mr Bolsonaro gave a televised address on Tuesday night to the sound of pot-banging in cities across the country. Unlike in his previous speech to the nation, he did not call for an end to lockdown measures.

But while the address was considered a victory for moderate ministers increasingly concerned with his handling of the crisis, on Wednesday morning the president shared a video of a man criticising governors for measures to combat the pandemic.

Brazil has registered 5,812 cases of Covid-19 and registered 203 deaths as of Wednesday morning, though hold-ups in testing means dozens of deaths of suspected victims are not yet included in the official total.