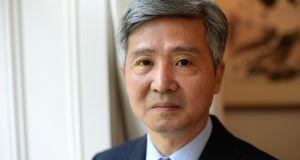 Chinese ambassador to Ireland, He Xiangdong, at his residence in Dublin, in October 2019. File photograph: Dara Mac Dónaill

The Chinese ambassador to Ireland has defended his country’s controversial policies in Xinjiang, which he said involve “preventative” counter-terrorism.

He Xiangdong was asked to comment in advance on new leaked documents on Sunday that are being published by The Irish Times.

The ambassador was told the highly classified documents show the then Communist Party head of security in Xinjiang province, Zhu Hailun, issuing detailed instructions in 2017 about the operation of camps in Xinjiang in which international observers believe up to one million people, and possibly more, are being held.

The people in the camps are from predominantly Muslim, Turkic ethnic groups native to the huge, sparsely populated northwestern Chinese province.

The documents, being called the China Cables, were leaked to the International Consortium of Investigative Journalists, which has shared them with a number of media partners, including The Irish Times.

The ambassador was told the instructions show that no one was to be allowed escape from the camps, that people were to spend a year in them, at least, before being released, and had to first reach certain scores on a range of matters, including “ideological transformation”.

“The issue Xinjiang faces is not about ethnicity, religion or human rights,” the ambassador said in a statement. “Rather, it is about fighting violence, terrorism and separatism.”

He said that from 1990 to 2016, thousands of violent and terrorist incidents occurred in Xinjiang, which caused heavy casualties and property losses.

“Faced with such severe circumstances, Xinjiang lawfully fought those crimes while addressing the root causes and making utmost efforts to protect residents’ basic human rights from the harm of terrorism and extremism.”

The preventive counter-terrorism and de-radicalisation measures were not against any ethnic group, but were to help those people brainwashed by radical religious ideologies to return to a normal life and reintegrate into the society before they move to the point of no return, he said.

Since 2015, China has released seven white papers on Xinjiang’s counter-terrorism and de-radicalisation efforts as well as vocational education and training work, which are “clear and thorough statements” of what happens in Xinjiang, Mr He said.

“Thanks to the preventive counter-terrorism and de-radicalisation efforts including establishing Vocational Education and Training Centers, Xinjiang, a place that once suffered gravely from terrorism, hasn’t seen a single violent, terrorist incident over the past three years.”

People’s right to life, health and development and other basic rights have been effectively safeguarded, the ambassador said. The government’s measures have been endorsed by all ethnic groups.

The camps, or centres as the ambassador said they should more accurately be called, have caused international controversy.

In July, Ireland was among 21 countries from across the EU – along with Australia, Canada and Japan and New Zealand – which co-signed a letter to the UN’s Human Rights Council, criticising China’s policies in Xinjiang.

The same week, 37 countries released a letter to the council defending China, including predominantly Muslim countries Saudi Arabia, Qatar, Pakistan and Tajikstan, as well as Russia, Venezuela and Nigeria. The US did not sign either letter.

Mr He said that in the past few years, more than 1,000 foreign diplomats, international organisation officials and media personnel agreed, after visiting Xinjiang, that the counter-terrorism and de-radicalisation efforts are an important contribution to the world and “valuable experience for all to learn from”.

The Irish Times visited the camps in August of this year. Read the report here.

“We will continue to handle our domestic affairs well,” the ambassador said in his statement this weekend.

“We will continue to implement our Xinjiang policy and ensure Xinjiang’s sound development. The most powerful response to certain media reports is Xinjiang’s lasting prosperity, stability, ethnic solidarity and social harmony.”