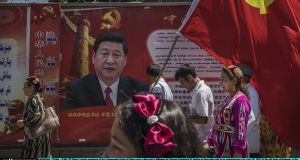 Ethnic Uyghur members of the Communist Party of China carry a flag past a billboard of President Xi Jinping in the old town of Kashgar, in the Xinjiang province. Photograph: Kevin Frayer/Getty Images

The Korean nuclear crisis and dealings with the mercurial US president Donald Trump come at an awkward time for Chinese leader Xi Jinping, who is keen to cement his grip on power ahead of a five-yearly national Communist Party gathering this autumn.

Clocking up an assured performance in these two geopolitical challenges would allow Xi to shine before the 2,300 delegates gather, but any mistake could stymie his efforts to secure his place in the pantheon of great Chinese leaders.

One of the ways Xi is ensuring his grip on power is by appointing his allies to key jobs. At the congress, 11 of 25 Politburo members, including five of the seven members of the all-powerful Standing Committee of the Politburo – could be replaced.

Most of the current members of the Standing Committee, are due to retire and Xi, who as well as president and head of the military, is the party’s general secretary, will stay on.

“Xi is tightening his grip and showing confidence. He knows resistance remains strong but is articulating confidence, perhaps to intimidating the resistance from actually coming out to oppose him,” said Steve Tsang, director of the Soas China Institute in London.

One school of thought believes the Communist Party can be divided broadly into three factions – the Zhejiang/Fujian faction, over which Xi holds sway; the Communist Youth League faction, which backed Xi’s predecessor Hu Jintao; and former leader Jiang Zemin’s faction, but there is debate about whether these factions function as hard and fast divisions.

“I don’t buy into the factions too much. The Jiang faction in particular is just a residue of the old Shanghai gang that no longer really exist as an effective faction, and Jiang is more a figurehead figure in resisting Xi’s rising dominance. I would group them in the run-up to the 19th Congress as those who support Xi’s plans and those who are resisting Xi’s assertion of his dominance,” said Tsang.

Xi has bedded down his authority by appointing his allies, such as former Beijing mayor Cai Qi, to key positions of power. In May, Cai was elevated to Communist Party chief of Beijing, putting him in line for a seat in the next decision-making Politburo.

Many of these new appointees hail from Xi’s time in the wealthy province of Zhejiang, which he ran from 2003 to 2007, first as governor and then as Communist Party boss.

His veteran ally Gong Zheng has been appointed governor of the prosperous eastern province of Shandong. He had risen to the rank of Communist Party chief of Zhejiang and, while he and Xi did not overlap directly, Xi’s team worked closely with Gong in the province. Such concentric circles are central to Chinese powerbroking.

Other big name appointees from within Xi’s faction include Huang Kunming, as executive deputy head of the central publicity department, known as the propaganda unit until not too long ago.

Gong replaced former governor Guo Shuqing, now chair of the China Banking Regulatory Commission, a key role as the government gears up for long-promised reform of the state banking system.

These reforms are unlikely to happen this side of the congress, however, as Xi has ordered the top brass in the financial sector to monitor risk, keeping a lid on any potentially destabilising shocks to the system at such a delicately balanced time.

Another of Xi’s allies to rise to a top governorship is Tang Renjian, who was confirmed as governor of the poor province of Gansu in May. Poor it may be, but a province like Gansu is a testing ground for poverty alleviation and the government is peering closely at the western part of the country with its Belt and Road initiative.

This is one of Xi’s most ambitious foreign and economic policies, which aims to reinforce China’s influence via a wide-ranging programme of infrastructure building in the country’s neighbouring regions, a modern-day Silk Road.

Tang is taking a job left by Lin Duo, who has been promoted to Communist Party chief in the province. He is seen as a protege of anti-corruption chief Wang Qishan, considered Xi’s closest ally on the Standing Committee.

Others are seeking to ally themselves to Xi before the congress.

Hu Chunhua, the Communist Party general secretary of economically muscular Guangdong province, who headed a large delegation to Ireland in June, has been proclaiming his loyalty to the chief in ways that could earn him a seat on the standing committee.

In October, at another party gathering, Xi was elevated to the status of “core” leader and a code of conduct was set out for the party’s 89 million adherents.

Among the behaviours that fall foul of the code of conduct required for delegates are holding a foreign passport, expressing doubt on party policy, connection to a religious group or receiving funding from a foreign organisation.

In the absence of any transparency about how decisions are made in the upper reaches of the Chinese Communist Party, rumours swirl like heady vapours before these big apparatchik get-togethers.

One rumour that surfaces regularly is of friction between Xi and Premier Li Keqiang, and speculation Li could be replaced as premier post-Congress. Relations between the Communist Party secretary and the premier have always been scratchy, however, and both feature prominently, if in strict hierarchical order, in the party’s main mouthpiece, the People’s Daily.

There are rumours Xi will name a successor at the congress, but he may well opt to continue in office for another five years after his 10-year term expires. There is no rule saying he cannot, but the party leadership is a stickler for convention, and any decisions on procedure that could affect the stability of the organisation are frowned upon.

When Deng Xiaoping retired, he retained a huge degree of power, despite his only official role being that as head of the Chinese Bridge Association.

What is likely is that an ideological “banner term” will be found to ensure Xi’s place in the Communist Party pantheon, up there with Mao Zedong and Deng Xiaoping.

In 2007, Hu Jintao’s notion of the “Scientific Outlook on Development” was written into the party’s constitution., while Jiang Zemin’s theory of “Three Represents” was ensconced five years earlier.

This could be related to his idea of the “China Dream”, which outlines no less a goal than the grand rejuvenation of the Chinese nation.

“China would like to maintain a certain level of stability, both domestically and geopolitically, to create a good atmosphere for the upcoming national congress of the Communist Party of China,” Liu Weidong, a research fellow at the Institute of American Studies of the China Academy of Social Sciences, told the Global Times.