Donald Trump jnr in an interview on Fox News' "Hannity" show said he didn't mention anything to his father about his meeting with a Russian attorney during his father's presidential campaign in June 2016. Video: Fox News 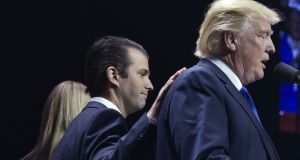 Trump jnr has said he did not inform his father about a meeting he attended with a Russian lawyer last June during the election campaign, on the promise of receiving incriminating evidence against Ms Clinton.

In an interview with Fox News aired on Tuesday night, Trump jnr defended his actions, but he said that “in retrospect, I probably would have done things a little differently”.

He said he did not tell his father about the meeting because “it was such a nothing, there was nothing to tell.

“It was literally just a waste of 20 minutes, which was a shame.”

On Wednesday, the president, after releasing a statement on Tuesday calling his son “high-quality”, praised the TV appearance and repeated his condemnation of media coverage of the investigations into alleged Russian meddling.

“He was open, transparent and innocent. This is the greatest Witch Hunt in political history. Sad!”the president wrote on Twitter.

Earlier on Tuesday, Trump jnr (39) published an email exchange with publicist Rob Goldstone which preceded the June 9th meeting with the Russian lawyer.

That chain of emails showed that Mr Goldstone had offered to “provide the Trump campaign with some official documents and information that would incriminate Hillary Clinton and her dealings with Russia”, as “part of Russia and its government’s support” for Trump.

In an interview with Fox News anchor Sean Hannity, Trump jnr said he did not know the identity of Russian attorney Natalia Veselnitskaya before the meeting, adding: “There is nothing I would ever do to endanger this country.”

My son Donald did a good job last night. He was open, transparent and innocent. This is the greatest Witch Hunt in political history. Sad!

Here's my statement and the full email chain pic.twitter.com/x050r5n5LQ

“It was such a nothing [meeting]. I would never have remembered the meeting,” he said.

He stated that there had been no follow-up emails connected with the meeting, saying “it was such a nothing there was no reason to follow-up”.

Legal experts said the president’s son could run into trouble if investigators find he aided a criminal action, such as hacking into Democratic computer networks, or violated campaign finance laws by accepting gifts from foreign entities.

One of the president’s personal attorneys, Jay Sekulow, in a round of TV interviews on Wednesday, said Trump jnr’s meeting was not a violation of the law and that the president was unaware of the meeting and the emails until recently. “There’s no illegality,” he told NBC’s Today programme.

Trump jnr, who has regularly criticised mainstream media outlets on Twitter during his father’s presidency, criticised the media for “picking sides so flagrantly”, arguing that the controversy over the circumstances of his meeting last year was “ridiculous and overplayed”.

In particular, he highlighted media coverage of his sister Ivanka, who was criticised for taking her father’s seat at some events at the G20 summit in Hamburg.

“Look at the attacks on Ivanka. If she was anyone else’s daughter she would be a feminist icon,” he said. “They try to belittle her at any chance. As her brother you do want to fight back.”

The interview with Hannity also saw the veteran newscaster criticise the “mainstream media” at several points for its coverage of the Trump presidency.

Mr Trump, a regular viewer of Fox News, tweeted ahead of his son’s interview: “My son, Donald, will be interviewed by @seanhannity tonight at 10.00pm. He is a great person who loves our country!”

The latest controversy to beset the Trump administration over its alleged links with Russia prompted widespread criticism from Democrats and some Republicans.

“This is very problematic. We cannot allow foreign governments to reach out to anybody’s campaign and say: ‘We’d like to help you,’” said South Carolina Republican Lindsey Graham.

Adam Schiff, the top-ranking Democrat on the House intelligence committee, said the committee wanted answers from Trump jnr and the other officials who attended the June 9th meeting, including Trump adviser Jared Kushner and former Trump campaign manager Paul Manafort.

Special counsel Robert Mueller is currently investigating possible links between members of the Trump campaign team and the Kremlin.

The White House has repeatedly rejected claims that any links existed, but confirmation by Donald Trump jnr that he was willing to receive information about Hillary Clinton linked to the Russian government could indicate an intent to collude with a foreign government.

Despite the confirmation by the younger Mr Trump that he attended last year’s meeting, in March this year he said he had never attended a pre-arranged meeting with a Russian individual.

“Did I meet with people that were Russian? I’m sure, I’m sure I did,” he said in an interview.

“But none that were set up. None that I can think of at the moment. And certainly none that I was representing the campaign in any way, shape or form.”