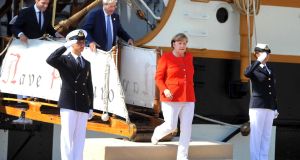 In the souvenir shops of Sarajevo’s old town, popular with the tourists that throng its narrow, cobbled streets, Bosnia’s past and present sit comfortably together.

Beside mugs and fridge magnets emblazoned with the flag of independent Bosnia hang T-shirts bearing faded portraits of Josip Broz Tito, Yugoslavia’s ruler for more than three decades after the second World War, and others sporting the mascot from Sarajevo’s 1984 Winter Olympics – a cute cartoon wolf called “Vucko”.

Yet no one remembers better than Bosnians how Yugoslavia died, in a series of wars spanning the 1990s that played out their darkest days here, during the 43-month siege of Sarajevo and the Bosnian Serb massacre of more than 8,000 Bosnian Muslims at Srebrenica 22 years ago.

The horrors of Yugoslavia’s demise still haunt most of the seven states that emerged from its ruins, and temper the nostalgia that many of their people still feel for what was once the freest and most prosperous country in eastern Europe.

Those ghosts also stalk efforts to bring the neighbours closer together, including European Union attempts to foster the kind of deeper co-operation that could boost their halting bids to join the bloc and unlock the region’s potential.

EU and Balkan leaders sought to drive these spectres into the shadows on Wednesday, as they backed plans to create an economic co-operation zone between Albania and five ex-Yugoslav states: Serbia, Bosnia, Kosovo, Macedonia and Montenegro.

Johannes Hahn, the EU’s enlargement commissioner, said that by removing trade barriers, harmonising laws and slashing red tape, the states could attract a surge in foreign investment and create 80,000 new jobs by 2025.

“I’m happy to say the leaders will endorse this idea . . . of creating an area of around 20 million people where there is finally free flow of goods and services . . . and to create a common digital market,” Mr Hahn declared.

“A booming economy is the best contribution to prosperity and peace,” he told his audience in Trieste, an Italian port just along the Adriatic coast from Croatia and Slovenia – the only ex-Yugoslav republics to have joined the EU.

The attendance of the German and French leaders gave heavyweight backing to a plan that the EU hopes will revive reform efforts in the Balkans and refocus the region on a European future amid Russia’s efforts to expand its influence.

With issues from Brexit to immigration sending tremors through the bloc, however, there is little desire among major EU states for a swift phase of expansion.

Dr Merkel said the Balkans should move “slowly but surely” towards membership – not the kind of pep talk to inspire states that feel stuck in the EU waiting room.

On the eve of the Trieste summit, Bosnia’s foreign ministry told The Irish Times that the country “fully supports the waiver of all trade barriers between countries in the region. It is however premature to talk about a possible way it should be further organised.

“The major challenge though is perception and narrative, for many stakeholders see this initiative as some sort of substitute for EU membership. It is not and it should not be organised as such, but rather bring us closer towards full integration into the EU.”

Albanian prime minister Edi Rama told Reuters in a recent interview: “This is something we have always made clear, and when I say we I mean all the leaders of the region . . . We will never swallow it as an alternative to European integration.”

Other fears stem from the final, fatal years of Yugoslavia, and concerns that the region’s biggest country – Serbia – may again try to bully its neighbours.

“We share different experiences of the past . . . We do not want that past to return, repackaged,” Kosovo’s prime minister Isa Mustafa has written of the plan.

Mr Hahn helped sweeten the deal on Wednesday with a pledge that more than €200 million in funding would go to firms around the region – and he insisted the new economic co-operation zone was not a dead-end on the long Balkan road to the EU.

“Quite the opposite,” he said. “It is about preparing the region for the future European single market . . . so there is a smooth transition into the European Union.”