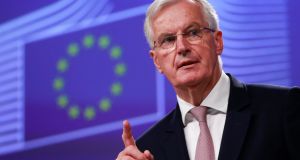 The EU’s chief Brexit negotiator, Michel Barnier, has called on the UK to get its act together and to set out its detailed position on issues ahead of the second round of talks here next week.

On Ireland Mr Barnier spoke of the hope that “political analysis” next week, led by his deputy Sabine Weyand and the UK negotiator Olly Robbins, could make progress on defining the elements of the Common Travel Area and the so-far unspecified “all dimensions of the Good Friday agreement” which it is hoped will be preserved. These range from extending EU citizenship rights to Irish passport holders to safeguarding peace programmes.

It would be necessary, he said, to make clear that both sides were on the same track before engaging in the sort of technical discussions that are starting in other areas.

Apart from its paper on citizens’ rights, roundly criticised by Mr Barnier, the UK has still provided very little detail on its positions – because it doesn’t know yet where it stands, observers here suggest – while the EU team has set out its ideas in nine separate papers with a further seven being posted to the UK on Friday. Mr Barnier said that for the key first-phase “divorce discussions” to proceed towards resolving differences “we need to be sure now we are working on the same base with the same objectives”.

And he warned firmly that substantial progress would have to be made on all three “inseparable” priority issues – citizen’s rights, a UK financial settlement, and the Irish Border and related issues – before talks could proceed on the future relationship between the EU and UK, particularly trade.

Briefing journalists after reporting to the European Commission on the talks so far, Mr Barnier refused to be drawn directly on UK foreign secretary Boris Johnson’s jibe on Tuesday that the EU could “go whistle” for the alleged €100 billion exit payment being demanded of the UK, beyond saying he could hear “no whistling, just a clock ticking”.

But he made it clear that a UK refusal to acknowledge that it will honour legal obligations arising from EU programmes already under way and to which the UK was committed would stymie any prospects of progress on the financial settlement or the opening of future relationship talks. The financial settlement was not “a ransom”.

“We are not asking for one pound more than they have committed to,” he said, referring to his team’s published list of such commitments.

Talks would be impossible without a degree of “confidence” in their partner. “How do you build a relationship which is going to last, with a country where you don’t have trust? How would you do that?”

Mr Barnier said he had heard Brexit secretary David Davis make a general assurance and he could not “imagine this great country would not honour its obligations”.

The rhetorical sparring over the financial settlement appears, however, to be largely posturing by rival elements within the UK Conservative Party and media and for domestic consumption. The expectation here is that in the initial round of divorce talks the UK will go so far as to agreeing a methodology for working out a figure later. That would be regarded as “substantial progress”.

On citizens’ rights – the rights of UK citizens in the EU and EU citizens in the UK after Brexit – Mr Barnier echoed almost word for word the concerns expressed by MEPs’ leaders on Monday. “As things stand, the British position does not enable those persons concerned to live their lives as they do today,” he said, adding: “For example, we want European citizens in the United Kingdom to have the same rights as British citizens who are living in Spain or any other country of the European Union. The British position as it now stands does not allow for that reciprocity.”

The UK position fell down on “reciprocity, continuity, and legal guarantees”, he said, and represented “considerable differences” with the EU position on issues like family reunion, pension rights and its complex administrative procedures. The EU remains insistent on a role for the European Court of Justice in guaranteeing what Mr Barnier called accumulated rights ahead of Brexit, not the rights of new arrivals.