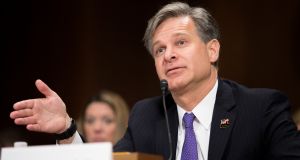 The nominee to replace James Comey as the head of the FBI has strongly defended his independence during a confirmation hearing at the US Senate, stating that US president Donald Trump has not asked him for a vow of loyalty at any point.

Christopher Wray, currently a private practice lawyer, worked under George W Bush’s administration as assistant attorney general in the US department of justice’s criminal division between 2003 and 2005.

He was proposed last month to become the next head of the FBI by Mr Trump after the president fired Mr Comey.

“No one asked me for any kind of loyalty oath at any point during this process and I sure as heck didn’t offer one,” Mr Wray told the Senate judiciary committee hearing on Wednesday.

Under questioning by senators, many of whom said that Mr Wray was undertaking the position at one of the most contentious periods in the institution’s history, Mr Trump’s nominee said that an FBI director should be prepared to “quit or be fired at a moment’s notice” if faced with anything “illegal, unconstitutional and even morally repugnant”.

“No one should mistake my low-key demeanour as a lack of resolve,” he added.

“Anyone who does would be making a very serious mistake. My commitment is to the rule of law, to the constitution, to follow the facts wherever they would lead.”

Mr Wray said it was “highly unlikely” that he would meet with Mr Trump alone if asked.

My son Donald did a good job last night. He was open, transparent and innocent. This is the greatest Witch Hunt in political history. Sad!

He also appeared to distance himself from the US president’s characterisation of the Robert Mueller investigation into possible collusion between the Trump campaign team and Russia in the 2016 presidential election as a “witch hunt”.

“I do not consider director Mueller to be on a witch hunt,” Mr Wray told senators.

Asked about his predecessor’s controversial intervention in last year’s presidential race, when he held a press conference about Democratic candidate Hillary Clinton’s use of a private email server when secretary of state, Mr Wray said: “I can’t imagine a situation where as FBI director I would be giving a press conference on an uncharged individual, much less talk to the Hill about it.”

Mr Wray’s confirmation hearing took place amid continuing controversy over the Trump administration’s links with Russia, following confirmation by Donald Trump jnr that he attended a meeting with a Russian attorney under the pretext of receiving incriminating material on Ms Clinton from the Russian government.

Mr Wray sidestepped questions on the issue during Wednesday’s hearing.

He also said that Mr Comey’s firing had not been discussed after he was approached to take the FBI job.

Earlier on Wednesday, Mr Trump, who is due to fly to Paris for meetings with French president Emmanuel Macron to coincide with Bastille Day, tweeted about his son’s appearance on Fox News on Tuesday night.

“My son Donald did a good job last night. He was open, transparent and innocent. This is the greatest Witch Hunt in political history. Sad!”

In the interview with Fox News, Mr Trump’s eldest son said he did not inform his father about his controversial meeting with the Russian lawyer on June 9th in Trump Tower.

That chain of emails showed that Mr Goldstone had offered to “provide the Trump campaign with some official documents and information that would incriminate Hillary Clinton and her dealings with Russia”, as “part of Russia and its government’s support” for Mr Trump.

In the interview with Fox News host Sean Hannity, Mr Trump jnr defended his actions, but he said that “in retrospect, I probably would have done things a little differently”.

He said he did not tell his father about the meeting because “it was such a nothing, there was nothing to tell.

“It was literally just a waste of 20 minutes, which was a shame.”