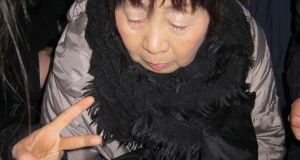 A serial murder trial in Japan took a cinematic turn this week when the accused, nicknamed the Black Widow by the local media, confessed in open court to having fatally poisoned her husband.

The case of Chisako Kakehi, now 70, has gripped Japan since her arrest in 2014, when the last of her four husbands, Isao Kakehi, a 75-year-old retired salaryman, was found dead at his home in Muko, a city near Kyoto.

Isao was the latest in a string of Ms Kakehi’s partners to have died.

“I killed my husband,” Ms Kakehi said from the witness stand on Monday. “I have no intention of hiding the guilt. I will laugh it off and die if I am sentenced to death tomorrow,” she said, according to The Japan Times.

According to authorities, Isao Kakehi was one of six men who died soon after marrying or dating Chisako Kakehi, the one-time proprietor of a T-shirt printing business.

Ms Kakehi has been on trial since June 26th, accused of killing Isao Kakehi and two other boyfriends and trying to kill another man she had dated using cyanide.

When she took the stand on Monday, Ms Kakehi initially said she would remain silent, but when asked by the prosecutor whether she had poisoned Isao Kakehi, she confessed, adding that there was “no mistake” about her role in his death.

“I wasn’t given any money after I married him,” Ms Kakehi said.

“I felt like Isao was discriminating against me in comparison to the last woman he was in a relationship with, and I got angry,” she added, according to news reports.

Ms Kakehi said she got cyanide from a business associate.

Ms Kakehi’s lawyers have said she has dementia and is incapable of accurately remembering details in relation to the men’s deaths.

The case has struck a particular nerve in Japan, home of the world’s longest life spans, where aging baby-boomers have skewed the country’s demographics towards the elderly.

The woman’s three other husbands, whom she married during the same period, have also all died, though she has not been charged in relation to their deaths.

According to one official estimate, Ms Kakehi inherited as much as 1 billion yen, or €7.7 million, from the men.