Iraqi government must win hearts and minds of its traumatised citizens

Defeat of Islamic State in Mosul must be followed by emergency relief, security and medical care 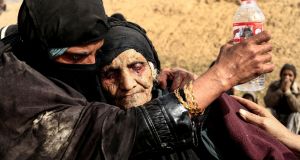 Displaced Iraqi women rest in the desert as they wait to be transported in western Mosul, Iraq. Photograph: Reuters/Zohra Bensemra

The defeat of Islamic State in Mosul will be a hollow victory if the Shia fundamentalist government fails to win hearts and minds of the city’s Sunni, Christian, and Kurdish citizens, exiled, tortured and traumatised by extremists, and fearful of their liberators.

The government has to immediately halt abuse faced by men interrogated by the Iraqi army and Shia militias on suspicion of belonging to or sympathising with Islamic State, also known as Isis.

Men and boys detained for investigation are beaten, killed and disappeared. They are separated from female relatives, who are dispatched to underfunded displaced camps without sufficient shelter, water, food and medical care for 900,000 people, while the daily temperature soars to 44-47 degrees.

Urgent emergency relief must also be provided for the thousands of Iraqi civilians still in Mosul’s Old City. The government needs to impose security and restore water, electricity, and refuse collection. Unexploded ordnance and booby traps must be cleared from buildings and rubble from streets, dangerous ruins bulldozed, bodies buried and schools repaired.

The return of utilities and resumption of the school year are essential if citizens are to regain confidence in a government whose persecution of Sunnis drove many to embrace Islamic State.

Prospects for early fixes are poor. The government continues to operate as a Shia sectarian body deeply suspicious of Sunnis and other minority communities. Baghdad has failed to expedite the return of residents to Falluja, Ramadi, Tikrit, and other cities liberated from Islamic State.

Instead, bureaucratic procedures make it difficult or impossible for citizens to rebuild homes and workplaces. Foodstuff and building materials trickle into devastated cities, delaying the return of displaced citizens. In some towns and villages people are prevented from going home. Municipalities have not been restored, leaving entire cities, towns and villages without local authorities.

Baghdad, its US and Iranian allies, and local figures have to formulate a plan for governing and reconstructing Mosul and the Sunni-majority provinces of Nineveh, Salahuddin, and Anbar where, after the 2003 US occupation, al-Qaeda, the parent of Islamic State, took root.

A plan is an urgent matter, not to be left for the long term. If displaced citizens are not allowed to rebuild their homes and lives and reconnect with Baghdad, al-Qaeda will reassert itself. While the territorial Islamic State “caliphate” may have been defeated, its adherents have gone underground to regroup and carry on with killings, bombings, and sabotage. Islamic State is, reportedly, eager to resume the tie, broken in 2013, with al-Qaeda central based on the Afghan-Pakistan frontier.

Reconstruction depends on external finance, effective management, and minimisation of corruption. So far, none of these elements are present. Donors have failed to raise the funds needed for the humanitarian needs of the three million Iraqis displaced by the war against Islamic State.

Tens of billions of dollars will be required for reconstruction and rehabilitation of the population. At least $1 billion is needed for restoring Mosul’s infrastructure alone. Out of 175 countries, Iraq is rated 166th most corrupt, by Transparency International. Therefore, a credible external mechanism will be needed to monitor spending on reconstruction.

Restoring proper governance to Mosul, Ramadi, Falluja and other Sunni cities is essential for the survival of Iraq and the stabilisation of the region. Before the rise of Islamic State, the three Sunni-majority provinces, alienated by Baghdad, had called for autonomy comparable to the self-rule enjoyed by the Kurds in their region.

Baghdad is certain to reject this demand as the Kurdish leadership is set to hold an independence referendum in September. The Kurds used Islamic State’s capture of Mosul to seize the oil-hub of Kirkuk and other land along the border of their region and intend to annex these areas, risking intervention by Baghdad, Ankara and Tehran, opponents of Kurdish self-determination.

Iraqi Shia militias, patronised by Iran, and Turkish troops deployed in the area, could act militarily to prevent the emergence of an independent Iraqi Kurdish state, launching a fresh conflict in the war-torn Fertile Crescent.

1 Covid-19: Policy reversal means State to enter Level 5 curbs for six weeks
2 Life under Level 5: What will the next six weeks look like for Ireland?
3 Covid-19: State moves to Level 5 for six weeks with hopes of ‘meaningful’ Christmas celebrations
4 Bill that overrides UK’s Brexit deal denounced in House of Lords
5 Coronavirus: Why Level 3 failed and why Level 5 might too
Real news has value SUBSCRIBE