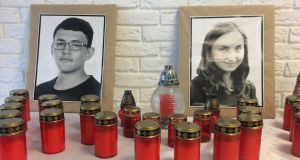 Photographs of Slovak investigative journalist Jan Kuciak and his fiancee, Martina Kusnirova, in the office of the Aktuality.sk news outlet in Bratislava where he worked. They were shot dead in February.

A photograph of Jan Kuciak still stands in the lobby of the Bratislava media firm where he worked; former colleagues in the newsroom continue to dig through reams of notes that he left behind; and on the streets of the Slovak capital protesters inspired by his memory are back on the march.

Nine months after the investigative reporter was shot dead beside his fiancee, Martina Kusnirova, in a crime that appalled Slovakia and eventually brought down its most powerful politicians, many of Kuciak’s compatriots are wondering how much their country has really changed.

Officials insist the crisis sparked by the double murder is over, but crucial questions remain unanswered: Who ordered the assassination? Are former top ministers who resigned still running Slovakia from behind the scenes? And why are prosecutors now targeting the young organisers of anti-government rallies?

“I never saw Jan afraid of anything,” says Martin Turcek, who worked on investigations with Kuciak for the Aktuality.sk news portal.

“He was a data journalist who could use his computer to extract every bit of information from public sources. We were a bit sensitive about the last story he wrote, about the Italian mafia, and we tried to keep the information inside a small group of people – but I never saw him afraid.”

“He thought people could find and harass him about this story, but he didn’t think they would kill him,” adds Peter Bardy, the editor-in-chief of Aktuality.sk.

“I sent him a message a couple of days before was killed, saying that if he was scared then I could hide him. But he told me that no, he was fine.”

Kuciak and Kusnirova were murdered at his home in the village Velka Matca, 50km east of Bratislava, on February 21st. Jan was shot in the chest and Martina in the head. They were both 27, and had planned to marry in May.

In his final investigation, published posthumously, Kuciak revealed that an adviser to Slovakia’s then prime minister, Robert Fico, and the secretary of its national security council had ties to an Italian businessman, who was suspected of belonging to the infamous ‘Ndrangheta organised crime group.

The double murder and its possible link to a nexus of politics and the mafia deeply shook Slovaks’ faith in their government, and sparked the biggest street protests here since Czechoslovakia’s 1989 Velvet Revolution against communist rule.

Young activists used social media to launch a movement called “For a Decent Slovakia”, which brought tens of thousands of people on to the streets to demand the replacement of top officials and a full investigation into the murders and political corruption.

This surge of pressure from the Slovak streets eventually forced the resignation of three of the country’s most powerful men – Fico and close allies interior minister Robert Kalinak and police chief Tibor Gaspar.

“People were already aware of corruption in high politics and they were frustrated,” says Juraj Seliga (28), one of the founders of For a Decent Slovakia.

“But the murders were so tragic and horrible – they killed a journalist, a young, innocent couple who were about to get married – that when the [alleged mafia] connection to the government and Fico’s assistant also came out, it was the last straw. Slovakia was bubbling but the murder was the moment it boiled over.”

After dominating Slovak politics for more than a decade, however, the pugnacious Fico did not go willingly or quietly.

Despite in previous years calling journalists “lying hyenas” and “dirty, anti-Slovak prostitutes”, Fico refused to take responsibility for fuelling hostility towards the media, and instead turned his fire on critics and particularly For a Decent Slovakia.

Echoing conspiracy theories spouted by populist leaders from Russia to Hungary to the United States, Fico accused the organisers of the protests – which were entirely peaceful – of taking money from liberal philanthropist George Soros and plotting a coup.

“We all saw the arrogance of Fico,” Seliga recalls.

“He was blaming young people, saying we were paid by Soros...blaming everyone else and not reflecting on anything. But the people pushed him to resign.”

Like many Slovaks, however, Bardy says the political changes “were only cosmetic”.

“The new prime minister, Peter Pellegrini, is only a puppet in Fico’s hands, and new interior minister Denisa Sakova was a deputy of Mr Kalinak...the system is the same.”

Fico and his old guard, Bardy believes, “still control all their people”.

Yet like many government critics, he acknowledges that investigators seem to have worked professionally in catching four people accused of involvement in the killings.

Four people are now in custody: the alleged gunman, getaway driver and a suspected accomplice, and a woman accused of hiring the trio for a reported €70,000.

Czech media link her to Marian Kocner, a wealthy businessman with strong political connections, whom Kuciak said last year threatened to “collect dirt” on him and his relatives and to make sure he would “never write anything again”.

“Kocner was Jan’s number one point of interest,” says Bardy.

“And for Kocner, Jan was the number one enemy because he could find out all the information about how Kocner made his fortune.”

Kocner – who is now in custody accused of financial crimes – has vehemently denied threatening Kuciak or having any role in the murders.

“I am 100 per cent convinced that the police have done, and will do, everything possible to solve this,” insists Jaroslav Taldik, a spokesman for Ms Sakova, the interior minister.

“I don’t know of any other investigation here to which so many staff and resources have been committed,” he adds of an inquiry that has seen Slovak police and prosecutors co-operate with counterparts from Italy, the FBI and Europol.

“There is an international investigative team working on this case with about 100 people involved. So we can’t say there has been any intention to keep things secret or to hide things.”

But while Slovaks wait to discover who put out the contract on Kuciak’s life, the country’s national criminal agency is taking aim at Seliga and other activists.

The founders of For a Decent Slovakia were informed this month that they are the subject of a preliminary investigation, based on a four-line, anonymous allegation that the anti-government protests were – in an echo of Fico’s own uncorroborated claims – a foreign-funded coup plot.

“We have nothing to hide, but it seems someone is trying to scare us; I think it’s payback from their side,” Seliga said of Fico and his allies, ahead of a fresh street protests called for Friday.

“Slovakia is at a crossroads. It could end up like [increasingly autocratic] Hungary or Poland, because Fico is trying to do that. Or we could be a normal, free country.”

Whatever lies ahead, reporters at Aktuality.sk expect their much-missed colleague to help them fight corruption in Slovakia for years to come.

“When I stumble upon a name that I think I recognise, I check Jan’s work to find that person. He had a whole universe of connections and information and it’s almost impossible to report on everything he knew,” he explains.

“Jan had hundreds of stories in his head that he didn’t have time to finish.”