US ambassador’s moustache gets up noses of South Koreans

Facial hair of diplomat, who has Japanese heritage, reminds Koreans of colonisation 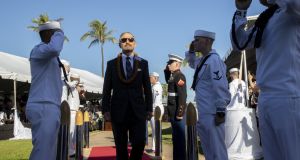 Ambassador Harry Harris defended his choice to wear a moustache on Thursday, saying that those who criticised it were “cherry-picking history.” Photograph: Kat Wade/Getty Images

At a time of growing unease in the alliance between the United States and South Korea, a hairy diplomatic issue has surfaced: the American ambassador’s moustache, which has become an object of ridicule and resentment among many South Koreans.

On Thursday, the envoy, Harry Harris jnr – a retired Navy admiral who was born in Japan to a Japanese mother and an American Navy officer – defended his moustache in the face of some sentiment that it was a reminder of Japan’s brutal colonial rule over South Korea.

South Koreans hold a long-running animosity toward Japan because of that period, and many recall that Japanese governors-general who ruled Korea from 1910 to 1945 wore moustaches.

“My moustache, for some reason, has become a point of some fascination here,” Harris (63) told foreign news reporters in Seoul on Thursday. “I have been criticised in the media here, especially in social media, because of my ethnic background, because I am a Japanese American.”

Harris, who became ambassador to Seoul in July 2018, said his decision to grow a moustache had nothing to do with his Japanese heritage. Clean-shaven for most of the time he served in the Navy, he said he had begun growing a moustache to mark his retirement.

When his appointment was announced, many South Koreans considered it a slight to their national pride for President Donald Trump to have chosen a Japanese American as the top US envoy to their country.

And one of the first questions Harris was asked upon landing in South Korea was about his moustache, with some South Koreans apparently wondering whether it was a calculated insult to Koreans.

“Harris’s mother is Japanese. It feels like that alone is enough for us to dislike him,” wrote one internet blogger last month. “Which side will he choose if he is asked to choose between South Korea and Japan?”

In a protest rally in downtown Seoul last month, young nationalist activists vented their anger by plucking mock moustache hair from a large photo of Harris.

Harris’s appointment to Seoul also came as South Korea’s relations with Japan were at a low point over disputes rooted in Japan’s colonial rule. It occurred at a time when Trump was demanding a five-fold increase in South Korea’s annual contribution to covering the cost of maintaining 28,500 US troops on the Korean Peninsula.

Since taking up his ambassador’s post, Harris has tirelessly pushed for the Trump administration’s demand over the US troops on Korean soil. He has also channelled Washington’s pressure on South Korea to retract its decision to abandon a military intelligence-sharing deal with Japan that US officials considered important in guarding against China and North Korea.

That role helped Harris gain the image of an overbearing US envoy among many South Koreans. But behind their misgivings also lay issues with his ethnicity.

It didn’t take long for Harris to realise how even a little facial hair on a US diplomat with his ethnic background could stir Koreans’ deep-seated sentiments against Japan.

“The moustache has become associated with the latest US image of being disrespectful and even coercive toward Korea,” the Korea Times said. “Harris often has been ridiculed for not being an ambassador but a governor-general.”

In a protest rally in downtown Seoul last month, young nationalist activists vented their anger by plucking mock moustache hair from a large photo of Harris.

“To those people, I say that you are cherry-picking history,” Harris said on Thursday, noting that growing a moustache was popular not only in the West but also in Asia in the early 20th century, even among Korean leaders who fought for liberation from Japan.

In an interview with the Korea Times last month, Harris noted that throughout his career, his ethnic background had come into play only twice: by the Chinese and now by South Koreans. When he was head of the US Pacific Command, he was outspoken about China’s aggressive moves in the East and South China Seas, and China’s state-run news media often cited his ethnic background when attacking him.

In October, South Korean police arrested more than a dozen student activists who broke into Harris’s residence to protest against Washington’s demand for an increase in defence burden-sharing. The students held placards demanding that the ambassador leave South Korea.

“I understand the historical animosity that exists between both of the nations,” Harris said on Thursday, referring to Japan and South Korea, the United States’s two most important – and often squabbling – allies in northeast Asia.

He has also said he has no plans to remove the moustache. – New York Times