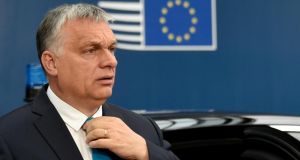 Hungary’s nationalist government has defended plans to tighten control over the country’s respected Academy of Sciences and accused critics of “hyperventilating about academic freedom”.

Prime minister Viktor Orban has already strengthened government influence over the economy, law courts, NGOs, media and education in Hungary, and now wants to put a new state council in charge of the academy’s research institutions and their work.

The government would appoint the chairman and half the members of the council, which would decide how to allocate funding to the institutions and how to manage their buildings and other assets across Hungary.

“The law amendments effectively provide for complete governmental and political control over the research network,” the institutions’ board of directors said in a recent statement.

“This endeavour . . . potentially jeopardises the independence of scientific research and science, which is otherwise guaranteed in the constitution.”

Critics say Mr Orban’s plan for the academy shows he is undaunted by criticism of his expansion of state power and by European Union legal action over his proudly “illiberal” policies towards migrants, NGOs and the Central European University, which is now being forced to move most of its courses from Budapest to Vienna.

Laszlo Lovasz, president of an academy that was founded in 1825, warned this week that “an unbalanced role for government priorities and control in science may soon become an alarming example that could be followed by other governments in the EU”.

“The government’s taste for centralisation can be seen in every area,” he added.

Mr Orban’s administration insists, however, that reform of the academy’s work will serve the national interest by gearing Hungarian scientific research towards innovations that can boost the economy.

“In all the hyperventilating about academic freedom recently, you probably haven’t heard that the Hungarian Academy of Sciences has been underperforming,” government spokesman Laszlo Kovacs wrote in his blog on Friday.

“Our goal is to promote research that contributes to Hungary’s economic growth and overall development, one that turns knowledge into tangible results,” he added.

“And in order to do that, the existing system that is now hindered by division and inefficient management should be brought under a new, more productive structure and made more accountable.”

In a recent letter to Mr Orban and his cabinet, dozens of members of the academy’s Momentum programme for excellence in research expressed “absolute incomprehension” at the reform plan.

“The continually deepening crisis of confidence threatens to lead to the emigration of our internationally competitive young researchers, and ultimately to the loss of an entire generation of scientists,” they warned.