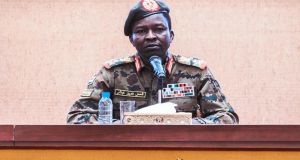 Sudan’s ruling military council for the first time admitted that it had ordered the dispersal of a Khartoum sit-in, which left dozens dead, as US and African diplomats stepped up efforts for a solution to the country’s political crisis. Photograph: Yasuyoshi Chiba/AFP/Getty Images

Sudan’s ruling military has acknowledged that security forces committed violations when they moved in to disperse a protest sit-in camp outside security headquarters in Khartoum last week.

The spokesman of the ruling military council, General Shams Eddin Kabashi, told reporters at a news conference that an investigation was under way and several military officers were in custody for alleged “deviation” from the action plan set by military leaders.

Gen Kabashi did not elaborate on the violations beyond describing them as “painful and outrageous”.

More than 100 people were killed in the capital and across Sudan in a sweeping crackdown last week, according to protest organisers. Protesters also said more than 40 bodies were pulled from the Nile River in the capital and taken away by security forces.

“We feel sorry for what happened,” said Gen Kabashi. “We will show no leniency and we will hold accountable anyone, regardless of their rank, if proven to have committed violations.”

The dispersal of the sit-in was an alarming turn in the stand-off between the protesters and the military, which removed president Omar al-Bashir from power in April after a months-long popular uprising against his 30-year rule.

UN experts on Wednesday said they were concerned Sudan is sliding into a “human rights abyss” after the deadly clampdown. The experts, appointed by the UN Human Rights Council, called for an independent investigation into violations against peaceful protesters in Sudan.

Forces for the Declaration of Freedom and Change, a coalition of political groups representing protesters, insists on an international investigation – a demand Gen Kabashi rejected.

Human Rights Watch urged the Sudanese military to restore access to the internet, which has been blocked since the start of the clampdown.

Separately, Gen Kabashi dismissed the death toll announced by the Sudanese Doctors Central Committee, a group associated with the protesters, as misleading and incendiary.

The group had said 108 people were killed and more than 500 wounded. The military-controlled health ministry later put the death toll at 61. –AP