‘Their time is up’: Pakistani army targets Pashtun protest movement 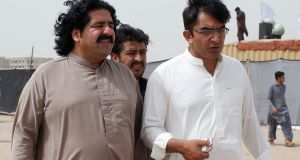 Ali Wazir (left) and Mohsin Dawar, leaders of the Pashtun Tahaffuz Movement (PTM) at a rally against what they say, are human rights violations by security forces in Pakistan. Photograph: Reuters/Akhtar Soomro/File Photo

Pakistan’s powerful military seems unstoppable in getting what it wants: its favoured candidate as prime minister; a victory of sorts in a dogfight with the Indian military; and its media critics hounded into silence or compliance.

Now the army has turned its sights on ending one of the last unbending sources of dissent to its power, an ethnic Pashtun rights protest movement known as PTM that has called the Pakistani security forces to account for extrajudicial killings and other injustices.

Trying to stop a rights demonstration in the troubled region of Waziristan on Sunday, the security forces killed at least eight people, according to members of the movement who described the dead as unarmed and peaceful protesters. The army also took into custody Ali Wazir, one of the movement’s leaders and a member of the country’s parliament.

After months of threatening and arresting leading PTM figures, the army has made clear that it will no longer tolerate the group. A military spokesman said that its members attacked and wounded security forces before any shooting started – though the army has shown no evidence to counter witness accounts and videos largely pointing to the contrary. The military also accuses the protest movement of being a proxy for enemies in India and Afghanistan.

The PTM leadership has insisted that their members were unarmed and that the movement would not back down. Protests broke out on Monday all around Pakistan’s Pashtun-heavy northwestern frontier.

The Pakistani state has long had a troubled relationship with its Pashtun population, the second-largest ethnic group in the country. Many Pashtun leaders disagreed with the formation of Pakistan when the country split from India in 1947.

More recently, the Pakistani army has treated Pashtuns with suspicion because the Taliban militancy against the state has been predominantly Pashtun – though locals in Pashtun areas say that until recently they have been governed by draconian, colonial-era laws, and that they feel trampled both by the militants and the Pakistani army.

When the PTM started last year, its leaders were blunt about the prospect of being jailed or killed even as they clung to non-violent protest. “We’re dying anyway,” was a common explanation.

Now the military seems set to make that prediction true, setting up a conflict that some observers are already comparing, if prematurely, to when Pakistan’s oppressed Bengali population broke away to form Bangladesh in 1971. Last month the military’s main spokesman made it clear that the PTM would no longer be tolerated, and that their next big move could be their last. The warning came at a time when Pakistan’s military was particularly confident, having recently shot down an Indian warplane and captured its pilot.

“Their time is up,” Maj Gen Asif Ghafoor, the spokesman, said of the PTM at a news conference.

Details of Sunday’s clash are not clear. Eyewitnesses said a convoy of PTM supporters, including two of its leaders who are members of parliament, were on their way to a sit-in of tribal elders in Datta Khel in North Waziristan, bordering Afghanistan.

The situation in the area has been tense. Earlier this month, Pakistani forces came under fire and lost one soldier. No group claimed the attack, but in retaliation, the military raided villages and rounded up people. The villagers protested the heavy-handed response.

When the convoy was trying to cross a checkpoint to reach the sit-in, security forces blocked their path. On the other side of the checkpoint, eyewitnesses said dozens of people from the sit-in arrived to receive the PTM members.

“It was clearly a charged situation, but it is not clear what triggered the military personnel to start firing,” said Hamid Ullah, a local who witnessed the incident. Videos from the scene before and after the firing did not show any armed men among the protesters. One video shows the convoy had crossed the checkpoint, and Ali Wazir, one of the lawmakers, was being received with a garland of flowers by protesters when shooting erupted and the crowd around him dispersed.

Mohsin Dawar, a leader of the PTM and the second member of parliament accompanying the convoy, rejected the military’s claim that PTM supporters had fired at soldiers at the checkpoint. Mr Dawar said all the supporters with him were unarmed. He urged an independent investigation.

“PTM is ready to present itself in any commission,” Mr Dawar said. “Killing unarmed and entirely peaceful protesters in broad daylight cannot be justified under any Pakistani and international law.” After arresting Mr Wazi, Mr Dawar said the military was searching for him. He spoke via satellite phone from an undisclosed location.

“North Waziristan has become a black hole since the incident,” he said. “Curfew has been imposed. Phones are not working. Roads are closed. The entire district has become a jail.”

Manzoor Pashteen, the top leader of the PTM, said on Twitter that the group will continue its non-violent constitutional struggle. “Those who attack, do they come with garlands of flowers around their necks?” he said, sharing videos showing unarmed protesters.

“Which one of these regular folks and the people’s representatives are carrying weapons?” Despite publicly branding the PTM a tool of foreign intelligence, in private Pakistani military officials seem divided about how much the movement owed to instigators from abroad and how much came from “emotional youth protesting for genuine grievances”, one senior retired official said.– New York Times