Why Elizabeth Warren should still be considered a frontrunner

US Politics: Senator may shine as flashier candidates for the Democratic nod burn out 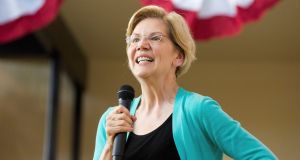 Last summer, New York magazine put a bounding Elizabeth Warren on its cover, along with the headline “Front Runner?” Even allowing for the crafty hedge in that question mark, the billing was clear enough. The Massachusetts senator was always going to be first or thereabouts in the race for the Democratic presidential nomination.

A year on, she is no such thing. Former vice-president Joe Biden is the speck in the far distance. Senator Bernie Sanders is wheezing to keep up. Warren, even after a recent spurt, is polling in the single digits. She is third in the way that Japan is the world’s third-largest economy: the gap to the front two renders the podium place almost meaningless.

To be trailing is no disgrace. To be at 8 per cent in her adjoining state of New Hampshire demands explanation. Some put it down to the former academic’s lack of charisma, as though Sanders is daily mistaken for Oscar Wilde. Others cite her contested claim to Native American ancestry, as though Biden’s past – the foot-dragging on race, the brush with #MeToo – was not just as fraught.

Yet a third theory centres, more plausibly, on her womanhood. The vexed question of “likeability”, with its air of euphemism, has dogged Hillary Clinton and House of Representatives speaker Nancy Pelosi. Even so, were Michelle Obama to enter the race, who doubts that she would be the immediate favourite?

We are left, then, with two possibilities. The first is that Warren lacks some ineffable quality of political winners that is given to Biden and Sanders (who have three failed presidential bids between them).

The other is that her strengths just happen to be of the slow-burning kind. As time passes, they will give off a bright enough glow. She is, if not the best candidate in this race, then certainly the most underpriced.

Warren trafficks in policy and almost nothing else. “I got a plan”, her answer to many an audience question, was becoming a wearisome tic, in fact, before she co-opted it as a joke. Her kind of intellectual depth is neither sufficient nor even necessary for electoral success. But it is an anchor against the vicissitudes of a long campaign. As flashier candidates exhaust their novelty value, she will still be there with her schemes for childcare, for housing, for conservation of flora and fauna.

Consider the salutary fate of Texan congressman Beto O’Rourke, a sensation in 2018 who has stalled for sheer want of things to say. South Bend mayor Pete Buttigieg is starting to hit the same wall. Very few people have personalities or life stories so compelling as to see them through 18 months of hustings in the world’s highest-stakes democracy.

Even Biden and Sanders might just be beneficiaries of name recognition, or, as everyone outside Washington knows it, fame. The analyst Nate Silver has noticed that Warren does better among “high-information” voters, while Sanders does a bit worse. By the end of the race, almost all voters will be high-information voters. They will gradually want to know more about the hopefuls than their outline biographies and their airy values. Few will be better stocked with specifics than Warren.

As important as the quantity of her ideas is their political flavour. She is the closest thing the Democrats have to a hybrid of the left and the Clintonian centre. For now, each side can embrace Sanders and Biden respectively. But as the final decision nears, memories will stir of the intraparty fissures that weakened Clinton against Trump – and would have done the same to Sanders, had he got the nod. A compromise candidate might make more sense.Warren, a wealth-taxer who admires competitive markets, would fit.

Of course, nothing says “coastal elite” like tenure at Harvard Law School. But Warren took a circuitous route there, via Oklahoma, a stop-start education and a political odyssey that had her voting Republican for some time. She could make more of this past than she does. Perhaps she feels stung by her last effort to leverage the personal: a DNA test to settle the matter of her identity that conveyed only desperation.

Or perhaps she senses that Democrats do not just want to win in 2020. They want to change America thereafter. As such, ideas count more than biography. Her “plans” will start to tell as assets as the contest wears on. And none of this reckons with a cosmopolitan party’s reluctance to choose between two white men.

Warren’s current poll numbers speak to her acute limitations as a candidate. They also mask her potential. – Copyright The Financial Times Limited 2019