Maduro ridicules US for sending aid to Venezuela 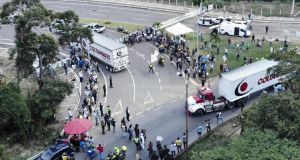 Aerial view of trucks loaded with humanitarian aid for Venezuela at the Tienditas Bridge on the border between Cucuta, Colombia and Tachira, Venezuela, on Friday. Photograph: Edinson Estupinan/AFP/Getty

Venezuela’s government on Friday said the United States should distribute humanitarian aid in Colombia where it is being stockpiled, while the opposition warned that blocking much-needed food and medicine could constitute crimes against humanity.

A day after the aid convoy arrived in the border city of Cucuta, president Nicolas Maduro ridiculed the United States for offering small amounts of assistance while maintaining sanctions that block some $10 billion of offshore assets and revenue.

Rival Juan Guaido, who is recognised by dozens of countries as Venezuela’s legitimate leader, warned military officers against blocking the arrival of aid amid spiralling disease and malnutrition brought on by a hyperinflationary collapse.

“Take all that humanitarian aid and give it to the people of Cucuta, where there is a lot of need,” Mr Maduro said in a news conference. “This is a macabre game, you see? They squeeze us by the neck and then make us beg for crumbs.”

“They offer us toilet paper, like (US president) Donald Trump threw at the people of Puerto Rico,” he said at the conference, which experienced technical difficulties including a blackout and a microphone failure. He was referring to Mr Trump’s improvised 2018 aid distribution in the US territory following a hurricane, during which he threw rolls of paper towels.

Venezuela’s dire situation has fuelled a political crisis that has peaked over the last month with Mr Guaido invoking a constitutional provision to declare himself the legitimate, interim president.

The 35-year-old argues Mr Maduro was re-elected last year in a sham vote and the country must hold new presidential elections.

More than 40 nations including the United States, major European powers and most of Latin America have recognised Guaido as the country’s rightful head of state.

“I want to see how many military officers are willing to commit crimes against humanity by not allowing the lives of the most vulnerable to be saved, 250,000 to 300,000 are at risk of dying if they do not receive immediate attention,” Mr Guaido said during a gathering of university students.

Officials at a Cucuta warehouse organized staple foods and sanitary products into sacks during an event attended by US ambassador to Colombia Kevin Whitaker and called on the armed forces to help it across.

The aid seems unlikely to move into Venezuela.

Humanitarian organisations have warned that attempting to force the aid into the country would be dangerous, and a top US official on Thursday said Washington did not plan to do so.

The Red Cross urged Venezuelans not to politicise the aid issue, without saying how or if the aid would arrive.

Cuba is one of Venezuela’s few remaining allies in the region although the country retains the powerful backing of Russia, China and Turkey too, which have warned others against intervening in its domestic affairs.

Mr Maduro said blocking the OPEC nation’s oil shipments would be economically and socially “catastrophic” for the country, adding that anyone who accepted a nomination from Mr Guaido to posts at PDVSA or Citgo would “face justice.”

European nations have been broadly critical of Mr Maduro but have sought to strike a counterpoint to the aggressive US stance by urging dialogue.

Mr Maduro said he was willing to meet with envoys of the so-called International Contact Group, that is backed by the European Union, but said a statement from its first meeting on Thursday was partisan and ideological.

“You’re deaf to the reality of a revolution with 20 years of democratic patrimony; you only follow the script written by the extreme right,” he said.

Mr Guaido has said the time for dialogue has passed. – Reuters