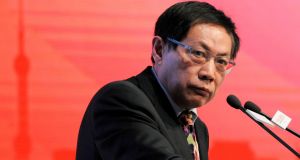 Ren Zhiqiang speaking at an event in Beijing in 2013. He has been jailed for 18 years for corruption, bribery and embezzlement of public funds. Photograph: China News Service/AFP via Getty Images

A Beijing court sentenced a prominent property tycoon to 18 years in prison for alleged corruption on Tuesday in a verdict that will finally silence one of President Xi Jinping’s most outspoken and fearless critics.

According to a statement by the Beijing no 2 intermediate people’s court, Ren Zhiqiang was found guilty of charges including bribery, embezzlement of public funds and abuse of power.

Before his retirement, Mr Ren (69), headed a state-owned property developer in Beijing that was involved in a number of high-profile projects in the Chinese capital. His one-day trial was held on September 11th.

Like Mr Xi, Mr Ren grew up as the privileged princeling son of a Chinese Communist Party official who participated in Mao Zedong’s revolution and later served as a vice-minister.

Mr Ren’s “red pedigree”, as well as his close connections with current senior government officials, was widely regarded to have allowed him to speak more freely than many of his peers. Nicknamed “the cannon”, he spoke candidly about government regulation of the property industry and other public policy issues.

But the severity of the sentence is a sign of the party’s anger after he began to criticise Mr Xi directly.

In early 2016, Mr Ren castigated Mr Xi on social media after the Chinese president said the primary function of government-funded state media should be to serve the party.

His Weibo account, with almost 40 millionfollowers, was shut down and his party membership suspended for one year. These were relatively lenient sanctions and Mr Ren then dropped out of the public limelight.

Earlier this year, however, Mr Ren burst back into public view with a scathing and thinly disguised critique of Mr Xi’s handling of the coronavirus pandemic and the president’s increasingly authoritarian rule. Mr Xi, he wrote, was not “an emperor in his ‘new clothes’ but a bare naked clown”.

Mr Ren was subsequently stripped of his party membership and detained by the party’s Discipline Inspection Commission, which investigates party members for alleged corruption and other violations of party discipline.

“Ren Zhiqiang has lost his beliefs and forgotten his duty,” the commission said in a statement in July. “He is not consistent with the central party leadership on major issues of principle ... He vilified the image of the party and the country, distorted party and military history. He is disloyal and dishonest.”

The commission also alleged that Mr Ren had used state funds for personal expenditures and “caused heavy losses of state-owned assets”. According to the court, he accepted bribes totalling Rmb1.25 million (€157,000) and was responsible for state company losses totalling more than Rmb 110 million.

Mr Ren could not be reached for comment. According to the court, he pleaded guilty and will not appeal the sentence. – Copyright The Financial Times Limited 2020