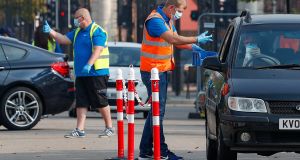 Almost 10m people in the UK are now banned from mixing with other households after restrictions were imposed on a large part of northeast England because of rising infections on Thursday.

Local lockdowns now cover almost 15 per cent of the population as governments in all four nations struggle to contain a surge in coronavirus with minimum damage to the economy, keeping workplaces and schools open while instructing people not to socialise to avoid spreading the disease.

Officials in Liverpool expect similar restrictions to be imposed on the nearly 1.5m inhabitants of Merseyside on Friday.

But experts have questioned the effectiveness of these partial lockdowns, warning that to reduce the spread of coronavirus, they need to be more stringent and combined with other measures, such as a well-functioning test-and-trace system.

Kamlesh Khunti, professor of primary care at Leicester university, said reducing infection rates required a massive community effort, not simply closures. The government should encourage people to keep working from home and enforce social distancing and mask wearing, he said, adding: “Lockdowns do not work on their own. It is really complex.”

Local lockdowns were first introduced in the city of Leicester in June, and then across a wide area of northern England on July 31st after coronavirus cases there jumped. However, more than two months on, levels have only fallen enough for restrictions to be relaxed in 11 areas with a population of just 2m.

In Leicester, where the toughest lockdown so far was imposed, all schools and non-essential shops were closed. Cases fell but have rebounded since the loosening of the most draconian curbs in July. Cases also dropped in Aberdeen after the Scottish government in August imposed an 8km limit on recreational travel on residents of the northeastern city, restricted gatherings and closed bars and restaurants.

Each local lockdown is different but one common feature has been a ban on households mixing at home with those outside their social bubble. Other variations have included restricting travel, as in Caerphilly and Rhondda Cynon Taf, where the Welsh government has told people not to travel in or out of the area unless absolutely necessary.

In the seven affected council areas of northeast England, including Newcastle and Sunderland, pubs and restaurants now will have to shut between 10pm and 5am.

In Bolton, household mixing has been banned since July 31st. But after a surge in cases in late August linked to younger people going out to bars, hospitality businesses were shut on September 8th and only allowed to offer takeaways. The town now has the UK’s highest infection rates, with 214.9 cases per 100,000 in the week to September 12th.

In Northern Ireland, Stormont on September 14th banned households from mixing in Belfast and its surrounding areas, as well as Ballymena, covering around 410,000 people – almost a third of the population.

Areas where case numbers fell – including districts such as Burnley and Rossendale in Lancashire, and parts of Bradford and Kirklees in West Yorkshire – have seen restrictions lifted. In Leicester, limits on household mixing remain in place.

After a surge in new cases in the area around Glasgow in August, the Scottish government banned social visits between households but allowed hospitality businesses to stay open. The area has a population of more than 1.8m, a third of Scotland’s total.

Nicola Sturgeon, first minister, said the more relaxed approach compared with Aberdeen reflected different transmission routes. While the latter’s outbreak was found to have started in pubs, cases in the region around Glasgow were “associated with multiple, smaller, unconnected household-based clusters”, she said on September 3rd.

Linda Bauld, professor of public health at Edinburgh university, said that, along with the closure of pubs, “very intensive” testing and tracing had been key to the success of the Aberdeen restrictions. “Local restrictions do have an effect,” she said.

While the “lighter-touch restrictions” of Glasgow could prevent the virus spreading, “I think we are going to need a longer time period to be confident about that response”, Prof Bauld said.

Public health experts maintain that an effective test-and-trace programme is a vital part of stopping the spread of the virus. But the system in England has become overwhelmed in recent days, with long queues forming at testing centres and delayed results.

According to the latest data from NHS Test and Trace, between September 3rd and 9th, 18,371 people tested positive for coronavirus in England, a 75 per cent increase from the previous week and the highest weekly total since May. But only 74 per cent of the contacts of those who test positive were reached – below the 80 per cent target.

Business leaders warn that even minor lockdowns are costing jobs and have demanded that the government fix the test-and-trace system urgently as the only long-term way to control the virus and protect the economy.

Ruby McGregor-Smith, president of the British Chambers of Commerce, this week wrote to the government noting that local controls were the “single largest blockage” to restarting operations. She called for “support for businesses shuttered by local restrictions” – in the form of additional grant funding and wage support.

But Craig Price, who runs a board game cafe in Bolton, believes the money “won’t touch the sides”.

“It’s frustrating. We were just getting back to normal,” he said. – Copyright The Financial Times Limited 2020