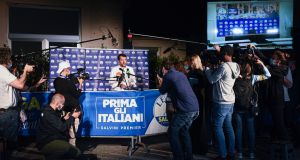 Matteo Salvini’s anti-migration opposition League party suffered a disappointing round of regional election results in Italy as it failed to win in the historically leftwing stronghold of Tuscany in the country’s first votes since the Covid-19 outbreak.

The failure of Mr Salvini’s candidate to pull off an upset in the central Italian region that has been controlled by the left for the past 50 years further slows the momentum of a leader who has recently seen a fall in support in national opinion polls, and has struggled to set the agenda during the pandemic.

Standing for the ruling centre-left Democratic party (PD) in Tuscany, Eugenio Giani took 48 per cent of the vote compared with 40.5 per cent for Susanna Ceccardi, the young League politician who stood as a candidate for a coalition of Italy’s rightwing parties.

Defeat in Tuscany marks the second time this year Mr Salvini has failed to make a breakthrough in traditionally leftwing Italian regions. In January, his candidate was defeated in the northern Emilia-Romagna. This latest reversal further diminishes his chances of bringing down the country’s national coalition government.

The PD, which shares power with the Five Star Movement, performed more strongly in the regional vote than opinion polls had suggested. It held on to the southern regions of Campania and Puglia, keeping Tuscany but losing the small central region of Marche.

At the same time as regional votes were held in seven of the country’s 20 regions on Sunday and Monday, in a national referendum Italians approved by 70 per cent a proposal to cut the number of members of parliament.

The result of the referendum was hailed as a victory for Five Star, which performed poorly in all the regions it stood in but has long campaigned for cutting the number of sitting lawmakers in Italy to reduce waste and save money.

“What has been achieved today is a historic result,” said Luigi Di Maio, Italy’s foreign minister and a former leader of the anti-establishment party. “Without the Five Star Movement this would have never happened.”

Following a strong performance in European elections last year, opinion polls suggested that national support for Mr Salvini’s League exceeded 30 per cent. Last August he subsequently quit a coalition with Five Star in a bid to force new elections, but was blocked when his former partners teamed up with the PD.

The latest opinion polls suggest the League remains Italy’s most popular party, but its support has fallen to about 25 per cent, and its share of the rightwing vote has been eaten into by Giorgia Meloni’s Brothers of Italy party.

The regional vote also rewarded governors from both ends of the political spectrum who have been praised for their response during the coronavirus crisis. Luca Zaia, the League leader of the wealthy northern Veneto region, was re-elected with 76.8 per cent of the vote, while the PD’s Vincenzo De Luca in Campania prevailed with 69.6 per cent.

In the northern region of Liguria, the centre-right politician Giovanni Toti was re-elected, taking 56 per cent of the vote, while in Puglia in the south the PD’s Michele Emiliano was voted in as governor with 46.8 per cent. – Copyright The Financial Times Limited 2020