Rescuers rush to save hundreds of stranded pilot whales in Australia

A rescue operation is underway after a pod of around 270 pilot whales became stranded on a sandbar off the remote west coast of Tasmania, Australia. 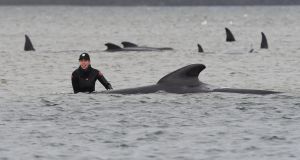 A rescuer stands next to a stranded pilot whale at Macquarie Harbour, Tasmania, Australia where more than 270 whales have been stranded. Photograph: Brodie Weeding/EPA 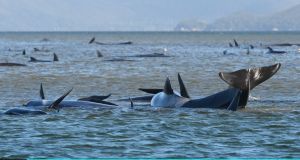 Hundreds of pilot whales are seen stranded on a sand bar in Strahan, Australia. Photograph: The Advocate - Pool/Getty Images 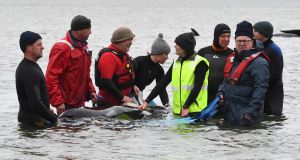 Rescuers were trying to refloat hundreds of whales stranded on a sandbar off the remote west coast of the Australian island of Tasmania on Tuesday, hoping to end one of the country’s worst beaching events.

Government scientists estimated about 90 of about 270 pilot whales trapped in shallow water had died since the stranding was reported a day earlier.

Aerial footage showed large numbers of the animals largely prone on a wide sandbar at Macquarie Harbour, about 200 km (120 miles) northwest of the state capital Hobart, while others floundered in slightly deeper water.

“We’ve got animals that are semi-buoyant so it probably won’t take too much to refloat those animals closer to the deeper water, and will involve just a bit of grunt from specialised crew in the water,” Kris Carlyon, a wildlife biologist with the state government, told local media.

Pilot whales are a species of oceanic dolphin that grow to 7 metres (23 ft) long and can weigh up to 3 tonnes. Drawing them back out to sea is a labour intensive process that can include physically pushing the animals or using specialised tarpaulins and pontoons to drag them to deeper water. Rescuers try to keep the whales upright to avoid disorientation.

Around 40 government scientists, 20 police officers, and local fish farmers and volunteers were involved in the rescue attempt, which experts said was the hardest they had encountered.

While the wet, cool conditions were beneficial for the whales, the rough waters and remote location were more challenging for their rescuers.

“It’s pretty ugly out there for people on the ground, but as far as the whales go it’s ideal,” Carlyon said. “If the conditions stay the same they can survive quite a few days.”

Scientists do not know why whales, which travel together in pods, sometimes beach themselves but they are known to follow a leader, as well as gather around an injured or distressed whale. – Reuters