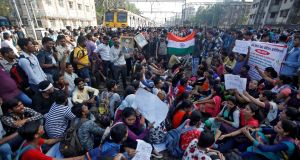 More than 20 million applicants, including postgraduates and some with doctorates, have applied for about 100,000 low-paid jobs with India’s state-owned rail network.

Indian Railways (IR) officials said these numbers were expected to proliferate over the next few days as Saturday is the deadline for submitting applications to be hired as locomotive drivers, technicians and security workers in the Railway Protection Force.

These jobs in the world’s fourth largest rail network, which annually transports more than 8.26 billion passengers and ferries a billion tones of freight, pay average monthly salaries of €250-€300.

IR officials said they were “overwhelmed” by the response to the job vacancies, and claimed that many of the applicants with postgraduate and doctoral degrees were “overqualified”.

In 2015 a staggering 2.3 million people had applied for 368 modest jobs in government offices in India’s northern Uttar Pradesh state. The minimum qualification for the job, which paid a monthly salary of €212, was a high school degree and the ability to ride a bicycle. Potential candidates included some 200,000 science and commerce graduates and postgraduates, and 255 with a PhD degree.

Unemployment is endemic across India, but assessing the scale of the problem is difficult as, unlike in the West, the government does not release job-related data. Therefore, accurately assessing unemployment comes from a combination of rarely issued official reports and anecdotal evidence.

Millions of labourers, domestic servants and street vendors fall outside the government’s radar screen, and sourcing information on them is a daunting if not an impossible task.

According to financial analysts, about 92 per cent of jobs in India are in the informal and largely unrecorded sector. Even for the remaining 8 per cent, accurate numbers are hard to come by.

The federal government issues an employment report once every five years and economists can glean trends from Indian census data, which is published every 10 years. The world’s top economies publish data every month.

The federal ministry for labour and employment claims national unemployment in the organised sector hovered at around 3.7 percent in 2015-16. Yet the data is based on what it convolutedly terms the Usual Principal Subsidiary Status approach, which requires only 30 days of work in a year to deem the respondent employed.

over one million Indians continue to seek employment each month, but job growth has slowed to a six-year low under prime minister Narendra Modi’s Hindu nationalist Bharatiya Janata Party government, which assumed office in May 2014.

According to a recent federal labour ministry report, one in three graduates in India up to the age of 29 is unemployed.