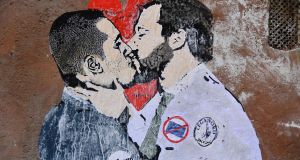 As Italy’s hung parliament gathered last week for the first time since the general election, a mural appeared in a Rome side street showing Luigi Di Maio, leader of the anti-establishment Five Star Movement, and Matteo Salvini, who heads the right-wing League, locked in a passionate kiss.

The image was quickly removed but it has become emblematic of the budding political romance between Di Maio and Salvini. The two were rivals during the campaign for the March 4th polls but emerged as the big winners when a wave of discontent swept through the euro zone’s third-largest economy.

On Saturday, the chemistry between Di Maio and Salvini was apparent when the pair struck a deal to join forces in the parliamentary vote to elect speakers for the upper and lower houses – fuelling talk that they could team up to form a government in Rome.

An alliance between the populist Five Star and the League, which is strongly Eurosceptic, has long been considered the worst scenario for EU policymakers and investors. They fear it could lead to economic reforms introduced in recent years being reversed and defiance of Brussels on everything from budget rules to sanctions against Russia.

“Let’s face it, the election of these institutional figures [the presidents of parliament] foreshadows the scheme for the future government,” wrote Alessandro De Angelis, deputy editor at Huffington Post Italy.

The agreement on the top legislative posts involved Di Maio agreeing to support Elisabetta Casellati, a veteran centre-right Forza Italia lawmaker, as president of the senate, while the League backed Robert Fico, a Five Star lawmaker, to be president of the chamber of deputies.

But what mattered most was the rapport and level of co-operation that developed between Salvini and Di Maio as they negotiated the settlement in a series of talks and phone calls late last week and on Saturday morning. And this was despite an attempt by Silvio Berlusconi to scupper the entente by pushing a rival candidate for senate speaker. The former prime minister and ally of Salvini has long been at loggerheads with Five Star.

“I speak to Di Maio more than my mother,” Salvini told reporters at one point during the talks. “Salvini proved that he is a person who keeps his word,” Di Maio said in an interview with Corriere della Sera, the Italian daily, on Sunday.

But forging a joint path to government is a far greater challenge than crafting a deal on parliamentary speakers. It is also unclear whether Five Star and the League want to move towards a full alliance that could mean painful compromises and would risk a backlash from purists on both sides.

However, there is plenty of time for convergence. Formal consultations to form a government, after no party gained a majority of parliamentary seats in the polls, are expected to begin in April and could last weeks as Sergio Mattarella, Italian president, assesses the potential political combinations.

One area of agreement could be to unravel some of the most unpopular measures adopted by governments dating back to the sovereign debt crisis of 2011 and 2012, including reversing increases in the retirement age and labour market reforms.

There could also be a deal on cutting certain taxes and taking a tough stance in Brussels on Russia sanctions, which both Five Star and the League oppose.

Some bigger economic policy questions – such as whether to push for a flat tax, as Salvini wants, or introduce a guaranteed income for poor families, as Di Maio plans – would be left for another day.

But the parties diverge strongly over the EU, with Five Star pushing a more conciliatory approach and the League stridently antagonistic.

Although Salvini and Di Maio both hope to be prime minister, they could settle on a compromise figure for the post and opt to trigger early elections – possibly at the same time as the 2019 European elections.

“At best, it would be a government with a limited agenda and shelf-life, aimed at paving the way to a new bipolar and populist system. It is unclear whether such a formula could secure the approval of the president,” said Wolfango Piccoli, an analyst at Teneo Intelligence in London.

The danger for Salvini in seeking a deal with Di Maio is that it risks shattering the alliance with Berlusconi that was the basis of the League’s gains in the election.

Although the League and Five Star could govern together without additional support, Salvini would rather keep Berlusconi close, his aides say. And the former prime minister may have no choice but to sign up to a such an agreement if it is the only way to ensure his political survival.

Several other options are on the table, however. Many Five Star officials still see the embattled centre-left Democratic party (PD) as a better partner because it shares the progressive beliefs of many Five Star voters.

Although the PD has vowed to remain in opposition, Five Star officials believe it could soften that stance – and they concede the electoral stalemate could even end with some form of national unity government.

“We have shown that we are open to everyone for the good of the country,” said Di Maio, “as long as dialogue and confrontation is centred on the priority of the citizens and not the political parties.” – Copyright The Financial Times Limited 2018