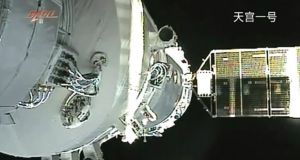 Only about 10% of the spacecraft is likely to survive re-entry. Photograph: AP

China’s defunct Tiangong 1 space station is hurtling towards Earth and expected to re-enter the atmosphere within the next day.

Most of it should burn up on re-entry, so scientists say it poses only a slight risk to people on the ground.

The European Space Agency has forecast that the station will re-enter sometime between Sunday night and early Monday Irish time.

The Aerospace Corporation predicted re-entry seven hours either side of 2am on Monday morning.

Tiangong 1 is expected to come to Earth somewhere between 43 degrees north and 43 degrees south, a range covering most of the United States, China, Africa, southern Europe, Australia and South America.

Out of range are Russia, Canada and northern Europe.

Only about 10 per cent of the 8½-tonne spacecraft is likely to survive re-entry. – PA