China’s ‘Jack the Ripper’ sentenced to death for 11 murders 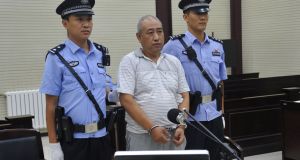 Gao Chengyong attending his trial in Baiyin, Gansu, in July 2017: he slashed the throats of his female victims and dismembered them. Photograph: Stringer

A Chinese court has sentenced to death a man dubbed China’s “Jack the Ripper” for the rape and murder of 11 women and girls, the youngest aged eight, during a 14-year killing spree.

Gao Chengyong (53) admitted multiple counts of homicide, rape, robbery and mutilation of corpses between February 1988 and May 2002.

“To satisfy his perverted desire to dishonour and insult corpses, many of his female victims’ corpses were damaged and violated,” the people’s intermediate court of Baiyin City said on its official Weibo social media account.

Ten of the victims were killed in Baiyin city in the arid northwestern province of Gansu and one in Baotou in the neighbouring region of Inner Mongolia, the Xinhua news agency reported.

Gao slashed the throats of his female victims and dismembered them, earning him the comparison with the Victorian-era multiple murderer Jack the Ripper, who killed and mutilated five women in east London.

Gao confessed and was sentenced to death, and said he would not file an appeal. He was arrested in August 2016 at his grocery store, ending a 28-year search, following a DNA test stemming from an unrelated crime committed by one of his relatives, state TV said.

Nine of the killings took place in his grocery shop and Gao cut off body parts of the victims, in some cases removing the reproductive organs.

The case shocked China, where there have been relatively few serial killers, despite the massive population of 1.4 billion people, although there are signs of a rising trend similar to that seen in the US in the 1960s and 1970s.

During the investigation, police had profiled Gao as someone who had a “sexual perversion” who “hates women”.

“He’s reclusive and unsociable, but patient,” they said.

While the police had DNA evidence, fingerprints and semen samples, the killer was not formally registered as living in Baiyin so he eluded detection.

The breakthrough in the case came after Gao’s uncle was arrested for a minor crime; police noticed a match in the DNA and became convinced the murderer they had sought for so long was related.

He was married for 30 years, and described by neighbours and friends as a quiet man who was known for his filial piety. Gao’s family was shocked by the revelation their father was a serial killer.

His eldest son, who did not live with his father, said on social media that he did “not really understand” why his father had committed the crimes.