Mozambique’s press faces violent reprisals in its war for freedom

The nation’s journalists still run the risk of abduction, detention and death threats 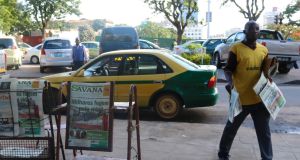 It’s a stormy evening in Maputo as John Chekwa recalls the night his son was abducted. Chekwa had earlier answered his phone to a chilling message: men were coming for him, and the attack was imminent.

The threat was the latest of many, but it was unsettlingly specific. He fled his family home with his wife and youngest child. But he couldn’t convince his older son, aged 15, to leave. The teenager stayed behind with a friend.

At 1am on December 7th, 2016, the night the warning was issued, eight masked armed men came. Chekwa says the two teenagers were beaten and thrown into a vehicle with other civilian detainees. As the men raided the family home, the boys managed to escape to a neighbour’s house and raise the alarm.

At the time, Chekwa was station manager for a rural community radio station in Manica, central Mozambique. There, he had spent years airing his community’s grievances, and calling out big companies and local politicians.

Chekwa says he has “no doubt” the attack came from the police – a claim they deny, according to Mozambique media.

Just under a year after the attack on Chekwa’s son, the editor of a publication in Nampula, northern Mozambique, also found himself at gunpoint. On December 2nd, 2017, a gunman threatened to kill Aunício da Silva, accusing him of publishing articles that tarnished an opposition Mozambique Democratic Movement candidate in upcoming local elections.

“I came to fear for my life but I will never give up doing my job,” Da Silva says. “I never felt totally safe. I have suffered many other threats.”

More recently, on March 27th last, a prominent journalist, lawyer and political commentator was abducted outside the National Union of Journalists’ headquarters in Maputo. Ericino de Salema was beaten and left unconscious, according to local media reports.

Similar to Chekwa’s experience, De Salema received threatening calls the day before his attack. His wife told the Committee to Protect Journalists that an anonymous caller had instructed him he would be silenced for being so outspoken.

All three instances are indicative of a larger issue across the country. Such attacks and threats happen all too often, leaving journalists unsteady and causing speculation on where in the system the orders have come from.

“The president may not know,” says Chekwa, “but if he didn’t want these attacks to happen then he’s supposed to take action. So to me it’s the whole system.”

That system has been dominated by the Frelimo party since 1975, after the then-military movement spearheaded the fight for independence from Portugal.

Just under two decades later, Mozambique held its first democratic multi-party elections, following a brutal 16-year civil war between Frelimo and rebel movement – now turned opposition party – Renamo. But tensions remain evident across the country, and the press has not been spared from the fallout.

The Media Institute of Southern Africa (Misa) – an NGO that monitors and promotes press freedom – has reported 51 cases of press violation in Mozambique between 2010 and 2016. And Reporters Without Borders’ 2017 World Press Freedom Index lists Mozambique in 93rd place out of 180 countries – having dropped 27 spots in just five years.

Like Misa, the International Research and Exchanges Board (Irex) aims to promote journalism in Mozambique, running a media strengthening programme funded by USAid. That programme’s chief of party, Arild Drivdal, notes that opposition voices are tolerated, and “dissenting voices let themselves be heard on a weekly basis” – unlike in some neighbouring countries.

Erik Charas is one of the dissenting voices Drivdal alludes to. He founded @Verdade (“The Truth”) – one of Mozambique’s more controversial outlets – in 2008. Although it began as a newspaper printed out of Maputo, it now only exists online, a direct result, Charas claims, of the government restricting its advertising.

When informed of Irex’s view, he bites back: “At the end of the day, they are tourists.

“I can name you dozens of African countries that we stand way above. But we still have challenges. The war [for press freedom] is far from over. We’ve come from a really terrible system and oppressive government.”

Additionally, independent media has been permitted in the country only since 1991, although the number of private newspapers with critical views of the government has been on the rise in recent years. But newspapers have relatively low circulation rates, in part due to low literacy rates and high prices.

On top of those issues, controversial outlets can be summoned to the state prosecutor again and again to explain themselves.

“It’s pretty serious,” Charas explains, “because there’s always uncertainty over if you will be allowed to leave or not.”

He calls it an intimidation process, because journalists can be held, sometimes for a few days, before they see a judge who says there are no grounds for detention. “Meanwhile you’ve spent a few days in jail.”

Community radio has its own battles. Interference in the media is inconsistent across the country, often peaking in rural areas where local officials reportedly have more and more power. By their very nature, this is where a lot of community radio stations are based.

A number of journalists comment that it is far easier to stay safe in a city, because in rural areas people are more secluded. “The system is really good at attacking one organisation and one individual, so isolation is part of the technique,” Charas explains.

However, he says journalists are becoming braver and fighting harder, seeing at first hand the power of rallying around each other. “We’ve learned to all come together for when a journalist is detained,” he says. “And that has made the government, I wouldn’t say fearful, but more cautious.”

Notably, Charas says there is now a dialogue between the government and the media which never existed before. Those in power will respond to a negative article to clarify something or defend themselves, whereas before they would have ignored it.

“It’s almost a flip of a coin. You go from a point where media is ignored, shuttered, kicked . . . to a point where they are reading everything and if something comes out that will add a shadow on their image, they make an effort to rectify . . . not send you to court.

“For me, that’s a significant change and a victory,” he says.

“That is changing a country for me.”

Any attempt to quantify such victories, however, shows a situation in flux, rather than on an upward trajectory. Throughout Mozambique, restrictions on the press often aren’t as aggressive as a threatening call, or a pointed gun. Within state media, there is pressure of a different kind.

In election times especially, state-run media has been accused of preferential coverage in favour of the ruling Frelimo party. Drivdal says that journalists working in roles alongside politicians, on campaign trails for example, may self-censor for economic reasons.

Speaking through a translator, an employee within the country’s state-funded media describes a system of news regulation – scenarios where stories must be flagged to the director if they are overly politically sensitive, and if they are deemed unsuitable cannot be published.

“The press is used to please the system,” the employee says. “There are people who gain from misinforming people.”

The employee adds that although they believe there is free speech in the country, there is a long way to go before it reaches full press freedom.

“Outside of Mozambique they want the facts. But here, we have to hide some things. And that’s a big problem. The image that transpires here is that we live in a democratic country, that we have freedom of speech. But here there’s a lot to fight for.”

The government press office did not reply when contacted for a response.

Although the government reaffirmed a commitment to press freedom last year, Nhanale suggests the political culture in relation to the press hasn’t yet caught up to the country’s media laws, which are currently some of the most progressive in Africa.

“The main actors [of Frelimo] still understand that media or journalists must be controlled,” he says. “It is not a matter of law, but I think it is a matter of behaviour.”

That behaviour means media outlets get shut down. At an assembly of community radio stations in Matola, about an hour outside the centre of Maputo, a station manager tells me his station was temporarily closed by officials. Another complains that he can’t put out the stories he wants because of pressure from local politicians.

“Do criminals make it difficult too?” I ask. “Gangs?”

“Not really,” he says. “Mostly politicians.”