North Korean defector taken to hospital on US helicopter

The UN Command releases video of a North Korean soldier's dash across the DMZ in an effort to defect to the South, under fire by his fellow countrymen. Video: Reuters 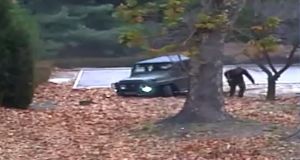 This screengrab shows a North Korea defector running from a vehicle at the Joint Security Area of the Demilitarized Zone (DMZ). Photograph: Handout/AFP Getty Images

North Korean border guards were only steps behind a fellow North Korean soldier when they opened fire and one briefly crossed the border pursuing the wounded defector as he dashed to the South Korean side, a video released on Wednesday by the UN Command (UNC) in Seoul showed.

The defector was critically wounded, having been hit at least four times in the hail of bullets as he made his desperate escape on November 13th. He was flown by a US military helicopter to a hospital in Suwon, south of Seoul.

Doctors announced on Wednesday that he had regained consciousness, having had two operations to extract the bullets, and his breathing was stable and unassisted.

“He is fine,” lead surgeon Lee Cook-Jong said at a press conference in Suwon. “He is not going to die.”

A UNC official said North Korea had been informed on Wednesday that it had violated the 1953 armistice agreement, which marked the cessation of hostilities in the Korean War.

The UNC official told a news conference that a soldier from the North Korean People’s Army (KPA) had crossed the Military Demarcation Line (MDL), the border between the two Koreas, for a few seconds as others fired shots at the defecting soldier.

“The key findings of the special investigation team are that the KPA violated the armistice agreement by one, firing weapons across the MDL, and two, by actually crossing the MDL temporarily,” Chad Carroll, Director of Public Affairs for the UNC, told reporters.

The incident comes at a time of heightened tensions between North Korea and the international community over its nuclear weapons program, but Pyongyang has not publicly responded to the high-profile defection at the sensitive border.

The dramatic video begins with a lone 4x4 army vehicle speeding along empty, tree-lined roads toward the border.

At one checkpoint, a North Korean guard marches impassively toward the approaching vehicle, but then runs in pursuit as it races by.

After passing a memorial to North Korea founder Kim Il Sung, where tourists often gather for tours of the Joint Security Area (JSA) inside the demilitarised zone, the jeep ran into a ditch just metres from the border with the South.

For several minutes the driver tried to try to free the vehicle, but the wheels spun uselessly in fallen leaves.

The driver finally abandoned the vehicle and sprinted for his life, pushing tree branches out of his way and sending leaves flying.

He scrambled up slightly rising ground to cross the border just seconds before at least four of the guards appear, their guns blazing as they ran.

One pursuing guard slid into a pile of dead leaves to open fire before running forward and appearing to briefly cross the dividing line between the two countries before turning around.

The video does not show the moment when the defector was hit, but he is seen lying motionless in a pile of brush next to a concrete wall in one of the later edited clips in the video.

Mr Carroll said the position was still exposed to North Korean checkpoints across the border.

The allied troops operating the CCTV cameras that captured the incident had by then notified their commanders and a quick reaction force had assembled on the South Korean side of the border, according to Carroll, though the video did not show this force.

Infrared imagery shows two South Korean troops crawling through undergrowth to drag the wounded North Korean to safety, while the deputy commander of the border security unit oversees the rescue from a few metres away.

Doctors conducted a series of surgeries to remove four bullets from the critically wounded soldier, who arrived at the hospital having lost a large amount of blood.

The surgeon, Lee, gave the soldier’s age as 24 years, and identified him by the family name Oh. “From a medical point of view he was almost dead when he was first brought here,” Lee said.

Hospital officials said they believe the man will recover, though there were continued risks of infection and he remained in intensive care.

The soldier showed signs of depression and possible trauma, in addition to a serious case of parasites that has complicated his treatment, the hospital said in a statement.

Continuing stress made the soldier hesitant to talk, but he had been cooperative, doctors said.

The patient first recovered consciousness on Sunday, and asked where he was in South Korea, Lee said. He was in “agony” when he came to, the surgeon added.

Since then doctors have played South Korean pop music for him, and American action movies.

The surgeon said he believed the soldier left North Korea of his own volition, but did not offer any more insight into the man’s motivation for making the dangerous escape.

While on average more than 1,000 North Koreans defect to the South every year, most travel via China and it is unusual for a North Korean to cross the land border dividing the two Koreas, which have been in a technical state of war since their 1950-53 conflict ended in a truce, not a peace treaty.

This incident marked the first time since 2007 that a North Korean soldier had defected across the JSA. - Reuters