Merkel and Putin accentuate the positive in Sochi meeting 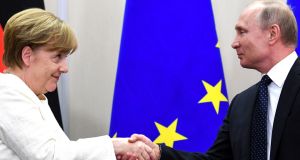 Angela Merkel and Vladimir Putin have agreed that bilateral interests, increasingly united against the Trump administration, outweigh differences between the two countries.

The Russian president welcomed the German chancellor to the Black Sea resort of Sochi with a bunch of pink and white roses, as a palpable thaw set in to relations frosty since Russia’s annexation of Crimea and the Ukraine conflict.

“We have a strategic interest in having good relations to Russia,” said Dr Merkel at a joint press conference after talks, saying serious policy differences that were obvious from their “open exchanges” did not mean the two countries did not have “areas in which we are completely of one opinion”.

Mr Putin spoke in a similar vein, saying that “differing analyses” of certain situations did not change the fact that Germany is a “key partner” for Russia.

“Solving problems is not possible when one does not engage in dialogue with one another,” he added.

Dr Merkel said the US decision to disown the Iran nuclear deal was no reason to walk away from a agreement that, though not perfect, offered more control, security and transparency than no deal.

“It would be becoming for Iran to say now, ‘we want to continue to observe this obligation’,” she said.

A day after receiving Syrian leader Bashar al-Assad at his Sochi residence, Mr Putin called on western countries to make a greater effort on the humanitarian front in the war-torn country. European leaders refuse to provide anything more than humanitarian assistance as long as Mr Assad is president and argue that Russia, as his main backer, should bankroll any reconstruction effort.

The two leaders were united against US criticism of the Nord Stream 2 pipeline, a second pipeline under construction to carry Russian natural gas to Germany under the Baltic Sea. Following a first Nord Stream pipeline that opened in 2011, Ukraine fears the alternative route will see a drop of gas through its territory and a subsequent fall in delivery transit charges, which comprise about four per cent of Ukraine’s annual budget.

Dr Merkel insisted gas delivered must continue through Ukraine while Mr Putin declared the project, controlled by the state-owned Gazprom concern, as an economic not political project. Russia would continue these deliveries, he said, “as long as they make economic sense and sense for all involved”.

On Thursday, Trump administration energy experts in Berlin called Nord Stream 2 “a bad idea . . . from a geopolitical perspective” that was “potentially . . . an elevated sanctions risk”.

Sandra Oudkirk, deputy assistant secretary of state for energy diplomacy, said Russian guarantees to keep supplying Ukraine with Russian gas were “unenforceable”. Washington would continue diplomatic efforts on this front but she pointed to last August’s US Congress vote allowing US sanctions against companies involved in the pipeline project.

Making light of such tough talk, Mr Putin joked on Friday in Sochi that US opposition to the Nord Stream project was perhaps the only point of continuity between the Obama and Trump administrations.