Prince Charles to walk Meghan Markle up the aisle 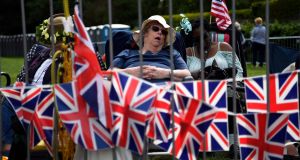 A royal fan camps along The Long Walk in Windsor a day ahead of the royal wedding ceremony of Britain’s Prince Harry and Meghan Markle at St George’s Chapel in Windsor Castle. Photograph: Neil Hall/EPA

Britain’s Prince Charles will accompany Meghan Markle up the aisle of St George’s Chapel in Windsor when she marries his son Prince Harry on Saturday in a wedding expected to be watched by millions around the world.

Kensington Palace said that Ms Markle (36) asked Prince Charles to step in because her father Thomas Markle was unable to attend the wedding following treatment for a heart condition.

Mr Markle was at the centre of a controversy in recent days after it emerged that he agreed with paparazzi to pose for photographs ahead of the wedding. The palace made clear that Prince Charles would not be giving the American actor away at the altar but “is pleased to be able to welcome Ms Markle to the royal family in this way”.

The bride’s mother Doria Ragland will be the only member of her family to attend the wedding, although some members of her extended family have travelled to Windsor, where they have made themselves available to the media. Ms Markle’s half-brother Thomas Markle jnr wrote to Prince Harry earlier this month warning him that marrying her would be the biggest mistake in royal history.

“I’m confused why you don’t see the real Meghan that the whole world now sees. Meghan’s attempt to act the part of a princess like a below C average Hollywood actress is getting old,” he wrote.

ITV dropped a plan to engage Mr Markle’s ex-wife Tracey Dooley and her son Tyler as commentators for the wedding but Mr Dooley, who grows marijuana in Oregon, has been promoting “Markle Sparkle”, a strain of cannabis named in honour of the bride.

With polls showing that two out of three Britons are left cold by the wedding, the number of street parties planned for Saturday is a fraction of those held for Prince William’s wedding in 2011. Prince William will be his brother’s best man but Ms Markle will not have a maid of honour, apparently because she does not wish to choose between her friends.

Instead, she will walk down the nave of the chapel accompanied by 10 bridesmaids and page boys, all children and including Prince George (4) and Princess Charlotte (3). Prince Charles will meet her at the rood screen at the entrance to the quire and accompany her the rest of the way to the altar.

After the wedding ceremony, which will be conducted by the Archbishop of Canterbury Justin Welby, the couple will drive through Windsor in a horse-drawn carriage. Tens of thousands of people are expected to crowd into the town’s narrow streets, watched by hundreds of police, including snipers stationed on rooftops.

Thames Valley Police on Friday asked well-wishers not to throw confetti at the couple, describing it as a security risk.

“Please do not throw confetti or any other items at any time during the day, particularly during the procession. It poses a potential security risk and it’s a bit of a pain to clean up,” they said.